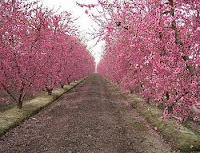 Hello, Fire Enthusiasts. How is everyone? While we're at it, what happened to January? It seems to me that we were just wishing one another a Happy New Year, and suddenly it's February! Any moment now and we'll see that flowers are blooming!!

I was a bit absent last week, and I'm sorry for that. The week started off with a bang as I (and many of you) participated in the music blog-fest that was sponsored by Alex J. Cavanaugh and well attended by well over 100 bloggers. I don't know about you, but I had a wonderful time talking about music and reminiscing about old memories that the tunes conjured up. I also got to meet a whole bunch of new people, which is always fantastic. I'd like to think I made some new friends in that group. I hope so.

Unfortunately, my allergies flared up. I made it through a terribly busy week at work, but feel as if I lost a day somehow. Friday morning, I was sure that it should only have been Thursday. I love my Fridays too much to have thrown it back, however. Just sayin'. 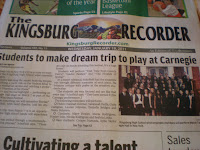 Something potentially earth shaking did take place last Tuesday. I was interviewed by my local paper. The reporter came over to my house and stayed about an hour. The paper is a shared one, including both Kingsburg and our neighbor, Selma. We'll find out this week how well it went.

Being a local author featured in one's paper should generate some interest, right? How about if you wrote a vampire book? With a trending topic like that you'd hope that the interest would be more magnified, right? Now how about if the setting of the novel was Kingsburg? What if the action in the fictional novel took place just before the very real event of the Kingsburg Swedish Festival which I have been going to since I was a kid? How large might that interest potentially get now?

I'm not bragging or anything. I'm only saying that what might take place in the next few weeks could potentially GROW VERY BIG! I don't have any circulation numbers for you, but the combined population of these two cities is about 30,000.

I thank those of you who stopped by a few weeks ago to offer ideas and advice about what I should be doing with my new paperback. I'm doing some and thinking about doing others. We'll see which way the wind blows this coming month. I have reached out to the local Branch of our library, the large retailer in both Kingsburg and Selma, and a magazine in the much larger city of Fresno, California, which is 25 minutes away.

Rest assured that you will be amongst the first to know how the interview worked.

P.S.: You can't discern him, but my oldest son is one of those students pictured beside the headline above who are going to New York City. My wife and I are going as well. It's going to be amazing because I have never been there before. I'll be reporting back about that, too.

Take care of yourselves.

Email ThisBlogThis!Share to TwitterShare to FacebookShare to Pinterest
Labels: promotion