From One Jimmy to Another 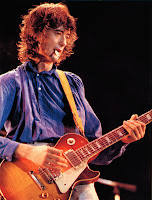 Hello, Fire Enthusiasts. How's your Sunday? I just thought I would take a moment to give a little shout-out to one of my favorite Jimmys in the world: Jimmy Page.

Today is James Patrick Page's 67th Birthday and I just wanted to mention it.

I play a little guitar, but mostly for fun. I picked it up too late in my teenage years and have never had time to get better. If there is one in the room, however, it will begin calling out to me until I step over and pick it up. Jimmy Page is one of the reasons why I first thought to strap one across my chest, although I could never hold it as low as he does...nor play it as masterfully.

Although I was born in March of 1969, the year that the mighty Led Zeppelin began to take flight with a massive debut album before the year started, and soon to follow with the brown bomber, Led Zeppelin II, it would not be until 1985 that I would discover them. I was a fan of Def Leppard. I remember people comparing the way they spelled their name with the way Zep did. I thought of Zep as being these old guys who were on their way out as hair metal was on it's way in. Little did I know.

When Phil Collins of Genesis fame played his "Against all Odds" song before a closed curtain, I had no idea that my taste in music was about to be blown wide open. He finished playing to good applause and then suddenly introduced three friends: Robert Plant, Jimmy Page and John Paul Jones. I understand now that their might be a bit of bad blood between Collins and Page over the quality of the set that night, but it doesn't matter to me. When the curtains finally pulled back, and the world seemed to explode in my ears, I simply had to listen.

I've been listening ever since...and The Song Remains The Same.

Thank you, Jimmy. And Happy Birthday.
Posted by James Garcia Jr at 12:10 PM