Well, first of all, I like to write. No doubt you've already figured that much out. Truth be told, however, I haven't been writing a lot lately. You see, I started writing Dance on Fire about twenty years ago. That was before the first house, the first of two children, a career and career changes for our household, etc., etc. A couple of years ago, as the milestone birthday number forty was well on its way, I finally came to the conclusion that if I did not want to rock that rocking chair with regrets, then I had better get on it. So I did. I finished the novel and then began the difficult task of searching for an agent or publisher. While I waited for queries to be answered, I jumped headlong into book number two in the planned series. Eight months later draft number two of the second book was completed. And then I stopped.
Anyone who writes knows that in order to be any good you must write. Perhaps every day. For me, however, I was not willing to keep doing this if it was only a hobby. It simply takes too much time away from the family. I get up before God (just a joke, Lord) and get to the office before 4:00 am. I don't get home until the job is done, and sometimes that means eleven or twelve hours later. Get the idea?
Thankfully, after a year and a half, just as I was beginning to think that I was going to have to pony up the cash to print my novel myself, I discovered Vamplitpublishing.com. After a query and a read, the great folks there decided to climb out on this limb with me and here we are.
So it's their fault!! Blame them!!
I'm kidding, of course. Whether you do or not, I don't know, but I certainly thank God for them. A dream has been realized.
Now, as for the second book, that will depend on you good people and whether or not you want to see another one from me. Hopefully, you do, but we have lots of time before we need to think about that.
So, that's where we're at now - living in the moment. As for tomorrow, and what we shall do with this little site, who knows. There's always that "I like your movies, your novels or your music, but I hate it when you open your mouth and act like you're an expert at something". Ask our friend John Mayer about this. Hopefully he's learned a lesson there.
I'm new at all this blogosphere stuff, so we'll have to see. However, without music, I would shrivel up into a little ball, so there's a pretty good chance that you're going to hear something about music here. I also love sports, so you're going to hear a lot of whining when my beloved Chicago Cubs continue to put more time between now and that last World Series appearance. You'll notice I said nothing about World Series win. Sigh! Let's just say it was before the Titanic began that one-way voyage.
I also love film, so you'll hear something about that.
How often might be the question.
Oh, and one last thing before I go. What shall I call you? How shall I respectfully address you? "My friends" sounds too much like Senator John McCain and Stephen King already grabbed "Constant Reader". I don't know.
Perhaps it'll come to me.
In the mean time let me simply thank you for having stopped by.
--James
Posted by James Garcia Jr at 1:09 PM 4 comments:

Posted by James Garcia Jr at 12:32 PM No comments:

A Human Story: Max, the man from Phoenix by James Garcia Jr. 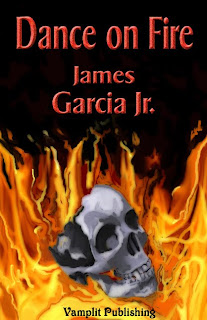 Dance on Fire by James Garcia Jr.. $7.99 from Smashwords.com
Two Kingsburg police officers have been butchered in an attack as ferocious as it is mystifying. Now two detectives and their families are being drawn into a battle that threatens to destroy them and those around them. In a marriage of horror and Christian themes of good conquering evil and redemption, Dance on Fire is the fictional account of characters drawn into the fire by supernatural forces.

Posted by James Garcia Jr at 10:37 AM No comments: