Hello, Fire Enthusiasts and distinguished guests. A couple of weeks ago I participated in a top ten song of all-time blogfest. It was so much fun, and I spent way-too much time building it. I laughed that I spent more time working on it then I ever have for any of the other blog posts or articles that I have written! Now, if you know anything about me at all, it's that I have a head full of useless trivia. I know a lot about music (even the stuff that I don't like), television, books and...movies. So, I was more than pleased to be participating today with a new blogfest: Top Ten Horror/Science Fiction Quotes. It is being hosted by Ellie Garratt and Jeremy over at iZombielover.

I hope you enjoy this recollection of some of my favorite or memorable quotes. Some you will recognize right away, while others may be new to you. If you are not a Superbowl fan or are simply waiting for the actual game to start, rather than listen ad nauseum to all of the endless build-up, then take the time to check out all of the other participants. It may take a while, but should be well worth it, and a lot of fun.

1) “You’re gonna’ need a bigger boat!” This particular quote is great because it was ad-libbed. The late Roy Scheider just pulled it out of the thin air off of Martha's Vineyard, where the classic film Jaws was being shot. I could have used several other lines from the film, but this might be one of the great scenes in the history of filmmaking. After a long while, the shark finally pulls up out of the water. Chief Brody sees it and stiffly sits up in shock. He slowly walks backwards into the cab of the small boat and the rest is history.

2) “A census taker once tried to test me. I ate his liver with some Fava beans and a nice Chianti.” The Silence of the Lambs is a masterpiece. It was evident when it stunned Hollywood by essentially sweeping the Academy Awards in 1991. This quote was made famous by yet another ad-lib. As the story goes, Anthony Hopkins turned to Director Jonathan Demme and told him that he wanted to say the line and try something. He did, adding his trademark noise at the end, creeping everyone out. I can well imagine the words "cut!" and "print!" soon followed. 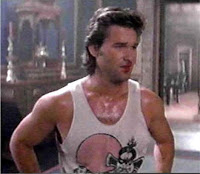 3) “Just remember what old Jack Burton says when the earth quakes, the poison arrows fall from the sky, and the pillars of Heaven shake. Yeah, Jack Burton just looks that big old storm right in the eye and says, 'Give me your best shot, I can take it!'". It's campy, it's John Carpenter and it's Kurt Russell in an unforgettable role as an over the top John Wayne. He's a quote machine in Big Trouble in Little China. One might question my taste in films at this point, but I can't help loving this movie. I just jump right into the Porkchop Express and ride along with old Jack Burton.

4) “You son of a bitch! You moved the cemetery, but you left the bodies, didn't you? You son of a bitch, you left the bodies and you only moved the headstones! You-only-moved-the-headstones!” Poltergeist is a fantastic film which I grew up with. I don't own the DVD yet because I've been hoping that they might put a large collector's set together. This film has a bit of everything: great actors, great effects, great writing and, if nothing else, Spielberg. 'Nuff said? Rumors persist that Steven had to step off of his producers chair at the last minute and see this film completed as an uncredited director. In any event, it is still good after all of these years.

5) “But,...then he's still out there.” Whether the producers knew it or not, they set up their franchise perfectly with the last lines in the original Friday The 13th back in 1980. The lone survivor (at least until the first minutes of part 2) awakens to find herself in the hospital. She asks the police officer what happened to the boy, Jason Voorhees, who pulled her into the water. They explain that they didn't find any boy...

6) “Listen to them, children of the night. What music they make.” Many have played Dracula or other vampires. Some have done well; however, for me, there is none better than Bela Lugosi. Don't believe me? Try looking up regular photos of the great actor and he still looks like the famous vampire.

7) It's perhaps one of the most memorable exchanges in film. In The Exorcist, Father Karras walks into the bedroom of Regan McNeil for the first time. She is fully possessed:
[Demon with Regan] “I'm not Regan."
[Father Karras] "Well, then let's introduce ourselves. I'm Damien Karras."
[Demon] "And I'm the Devil. Now kindly undo these straps."
[Father Karras] "If you're the Devil, why not make the straps disappear?"
[Demon] "That's much too vulgar a display of power, Karras."

8) I typically do not see a film multiple times until it is released onto DVD or video before that. With the classic film, Jurassic Park, I saw it three times in the theater. As often as I use the quote: "I hate this hacker crap!" whenever my pc is acting up or I am unable to access whatever it is I want on the 'net, the following is my all-time fav. When John Hammond attempts to explain away the trouble the park was having as totally explainable, Ian Malcom counters.
[Hammond} “All major theme parks have had delays. When they opened Disneyland in 1956, nothing worked!"
[Malcolm] "But, John. If the Pirates of the Caribbean breaks down, the pirates don't eat the tourists."

9) "Take your stinking paws off me, you damned dirty ape!" There have been many remakes and all-too many poor sequels, but nothing beats the classic original, The Planet of the Apes, and this signature line. After all, it is the late great Charleton Heston!

10) Lastly, as much as I really didn't want to use this quote, it was probably inevitable. My wife encouraged me to use it. It was brilliant at the time, and has been used and overused since George Lucas surprised the world with it back in 1980 in the The Empire Strikes Back. It was one of the great all-time cinematic twists. Therefore, whether I am tired of it or not, I shall leave you with the exchange:
[Luke Skywalker] "I'll never join you!"
[Darth Vader] "If you only knew the power of the Dark Side. Obi-Wan never told you what happened to your father."
[Luke] "He told me enough! He told me you killed him!"
[Darth Vader] "No. I am your father."

Once again, I hope you all find this blogfest as fun as I have. I look forward to reading what everyone else considers to be the greatest quotes in Horror/Science Fiction.