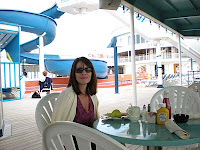 Well, Fire Enthusiasts, it is the last day of 2010. However, rather that spend a few moments reflecting upon what has transpired or what we hope for with the coming year, I simply wish to publicly offer my thanks to my wife.

You see, prior to 2010, neither she or I really knew what was in store for us regarding our time. We were just caught up in the moment. My dream of being a writer was slowly becoming a reality. In February, my crossover horror/Christian novel was released as an e-book. Next came blogging and attempting to get my name out there. Reviews began to trickle in, eventually leading to my working for a local magazine as a reporter. I then started writing for other blogs on top of everything else. We haven't even discussed the fact that nearly every single moment I was social networking. Soon I had to strap an iPhone to my hip as well. Who knew? Did I mention my 10.5 hour day job?

My wife has been understanding as I race home to my trusty laptop each day after work. She has said very little as I plugged myself in and virtually ignore her as well as my "teen aged" boys. I use that phrase because my 12 year old will not be 13 until late January, but he might as well be one, pretty much doing everything that teenagers do...or don't do! We have him and the 16 year old.

Yet, as my novel was just released as a paperback, and will soon be followed by the sequel, the question remains: how long is this trend going to continue? Are we looking at another year of her having to sit alone on the couch while I hold my nose one foot away from a computer monitor, plugged in?

Therefore, as we navigate through this last day of the year, I just wanted to give a shout-out to my wife. She understands that this is my long-dead dream suddenly revived and realized. We usually do not stay out late on New Year's Eve; however, we typically do take time out for ourselves, seeing a movie and having dinner. You see, not only is this the last day of the year, but it is her birthday as well.

So on this day, I say to my wonderful wife: Happy Birthday...

...and thanks for understanding.

To the rest of you: Have a Happy and safe New Year!