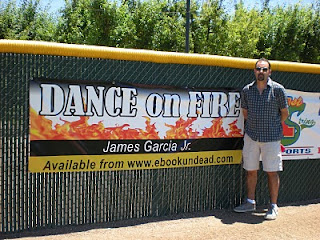 Good Morning, Fire Enthusiasts. How is the weekend going?

As the photo may indicate, we have spent the entire weekend at the local Cal Ripken Little League field, where my son and the 12 year old All-Star Team is attempting to win it's own tournament. We are in the middle of California, in what's called the Central Valley. We're surrounded by mountains with Sacramento to our north and Los Angeles to our south. If you've heard of Fresno, then that's about where we're at; right in the middle of this thing. It's great because we're only a few hours from the mountains; Yosemite National Park; the pacific coast; San Francisco; and everything good to be found in the L.A. area, such as Disneyland. During the summer, however, it can be several months of upper 90's to the upper 100's. Thankfully, this weekend hasn't been that bad. We've had a breeze most of the time that has eased the effects of that hot sun.

In spite of the amount of games played (three so far for us, with another two today), as well as the amount of time spent helping out (barbequed once and field prepped countless times), I have managed to participate in the Book Blogger Hop where I have met some interesting new people on some cool blogs that I may not have ordinarily ran across. It is a great idea and sponsored by Jennifer over at Crazy-For-Books. If you haven't tried it for yourself, there's still time. I enjoyed the experience and look forward to doing it again.

I've started reading Michael Slade's "Headhunter" again. I can't tell you how many times I've read this book. I can, however, tell you that I have had to buy this book three times already because I have lent it out over the years only to never get it back. This time I managed to locate a hard cover. This one will be remaining on my book shelf, I believe. I don't want to say more because I will be guest blogging about this subject in the coming weeks. I'll be sure to let you know when and where.

Anyway, it's almost time for me to get back to the ballpark, so I'd better go.

Have a great day and a good week.