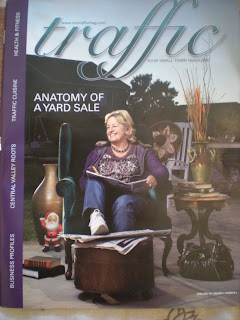 Hello, Fire Enthusiasts. How was the weekend? I was unable to post a "Sunday Morning Musings" this morning because of two reasons. The first reason was because there were two many things going on. We had the conclusion of this weekend's All-Star baseball tournament, followed by a membership service in church for my youngest son. Originally, we had called, e-mailed, texted, etc., between winning Saturday night and finding out that the next game was Sunday morning. However, when the game ended and we realized that we might just make it, suddenly my favorite sport was Nascar! He had to do it in a slightly soiled baseball uniform, and us in very casual attire, but we made it! The second reason was because there were some hot irons in the fire and I needed to see how they might play out before I posted about them.

As you can see, I had another positive review come out for "Dance on Fire". Traffic Magazine, a local magazine that distributes 17,000 copies with what they believe to be a reach of 34,000, carried a great review and I am very excited about it. 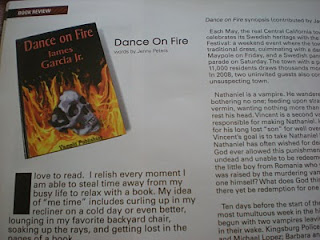 Perhaps someday I will post the review in it's entirety, but for now I will offer simply a taste: "Dance on Fire...is captivating from opening lines through to the last word... What I found most intriguing was the way James cleverly knit Christian ideals and scripture into a traditionally non-Christian piece of fiction. James has a knack for weaving words together much like an accomplished quilter pieces together their fabrics."

Tomorrow I will be guest blogging for C.J. Ellison over at Wicked Writers. The prompt was Favorite Book Series. I am hoping to get more people to read one of my all-time favorite authors: Michael Slade.

Lastly, but certainly not least: The good folks over at Kings River Life Magazine, a local online magazine in my area have asked me to come on staff as a contributing writer. They just heard about me because of the Traffic review. The plan is for them to do a review as well for their August Issue. Working for them sounds like a lot of fun and will be great for getting my name out there further. I am looking forward to that first assignment already.

By the way, you don't think that the folks over at Saturday Night Live will be too upset about me borrowing their Weekend Update title, do you? I hope not.

Perhaps I'd better get out of here before they do!