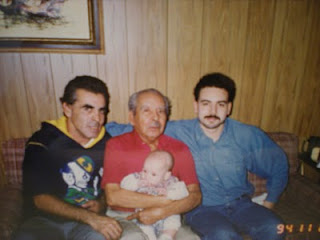 Hello, Fire Enthusiasts! I usually start thinking late week about what I might want to post about for my most regular of posting day: the Sunday Morning Musings. I had several possibilities floating about my head. The one idea which seemed to be gaining the momentum was a status report on where I am now in terms of Dance on Fire's success, gains made in networking, the strengthening of the PR machine, etc. However, I then happened by today's post by DL Hammons, who reminded me that there was really only ever one choice for the topic today. I thank him for that bit of clarity.

Therefore, I would like to salute the Dad's out there. Not the greatest amongst us necessarily, but the one's who simply do the best that they can, endeavoring to be there, wherever there is.

In the photo above you'll see my grandfather. He's gone now, but the thing that I remember most about him was his laugh. He appears serious and all, but that was just how he looked. That man could laugh and giggle. I look forward to hearing it again, not that I'm in any particular hurry to visit just yet. I think he'll be there waiting for me when I do arrive.

In the meantime, I still have my dad. He's the other gentleman in that photo. He will probably never read this post; the technology is not really his thing. In fact, you would rarely catch him reading much of anything unless it was police reports, back when he was still working. Having said that, I was terribly impressed and honored when he did pick up my novel while it was yet unpublished and read it. He has been very proud, and asks me often how everything is going. It has been very encouraging to me.

So, once again, thanks DL, and thank you dad, for everything.

And thank you to all of the dads out there, written by one of your sons. That's me, a little younger, but pleased after the birth of my first son. He's the tiniest in the photo, although he stands well above all of us now. May we be worthy to take the torch and carry it, providing light, warmth and guidance for our sons and daughters.