Hello there, Fire Enthusiasts. How are things? I am well once again. I am no longer irritating everyone around me with a perpetual clearing of the throat. Thanks for asking. Actually I do want to thank everyone for their kind notes, whether here or on any of the other social networks, I certainly appreciate anytime I am mentioned, especially when folks are asking how I’m doing.

Today, I have come to you to speak about other people's books. I managed to get two novels read since the last time that we spoke. Before I get to them, I want to tell you about some e-books that we are giving away at Kings River Life Magazine.

Many of you may know that I write magazine articles for an E-zine from my neck of the woods. I do one about once a month, and they range from local events in my town to restaurant reviews to pet rescues. This week, on the advice of my fearless Editor-in-Chief, we took a look at the state of publishing and some of the great writers that are out there, myself excluded. She didn't ask me to stay out of it, I just chose to. This was not so much about me, although my writing has certainly benefited from the exciting times that we live in. Instead, I just wanted to celebrate and feature several of the great voices that I have discovered and reviewed in these pages. You no doubt will recall Carole Gill, Erin Cole, Marissa Farrar, Lorelei Bell and Phil Tucker. If you have yet to read their works, visit the magazine with the above link and enter for a chance to win an e-book. 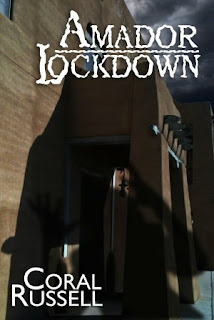 If you like ghost stories or ghost hunters, then this will be right up your alley. It is the interesting take on ghost hunting and what could happen when you fool around with that sort of thing.

Something has moved into the Amador Hotel. Hector, Marcos, Bev, and Tony of the Paranormal Posse are called in to either debunk the haunting or get rid of whatever is causing the problems. With the surprise arrival of Hector's son, he tries to keep his professional and personal lives separate, but whatever is haunting the Amador Hotel has other plans.

I found the story to be well done. It takes place in the American south-west and is heavily flavored with Hispanic references, including language, food and culture. I found that to be a nice change and well thought out, adding a nice spice to an already interesting ghost story. You will also get the perspective of the ghosts in the plot, which I liked. It is given in small bites, so if you find yourself not quite catching on, just give it time.

Being that I knew very little of the actual work of ghost hunters, I found it intriguing to see that there is more than simply walking around “haunted places”. We get to see them giving tours, doing research and speaking to witnesses, using expensive equipment and eventually doing a lockdown where they and several others spent the night. That last decision might have been a bad one, but you'll have to find that out for yourselves.

The story takes a left turn at the end which was quite a different payoff. We go quickly from hunters to questions of possession, where the material takes a very dramatic twist, making Amador Lockdown well worth your time. 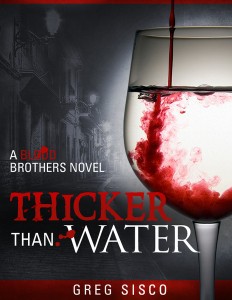 Author Greg Sisco and Thicker Than Water.
Welcome to the Greg Sisco channel! *laughs* Having just read One Night Stan’s, which I’m still buzzing about, I went right to his take on vampires, which was the original book that caught my attention to the work this incredible author is doing in the first place. Little did I know!

Sisco has informed me that he has many things going on for this year, but nothing else for me to read at the moment. That’s for those of you who might start worrying that I have become infatuated with his writing. Well, let me tell you that there’s a reason why I immediately launched into his other novel just as soon as I had finished Stan’s, and that it only took me about two days to finish. He’s that frigging good.

Tyr and Loki are not your teenage sister’s vampires. Their skin is not covered in glitter. They do not drink the blood of possums instead of humans. They view humanity as a secondary species; they have mastered the skill of manipulating and seducing women; and if you find yourself in a room with them, don’t expect the opportunity to say goodbye to your loved ones.

Since the Crusades, the Blood Brothers have waged war on all things wholesome. They have terrorized mankind with their hedonistic and brutal theatrics every night for a thousand years.

Once again, it isn't necessarily the subject matter that drives my appreciation for what this author is doing, but the exceptional writing. When it's this good it really doesn't matter what the story is. That was my problem with Stan's. I didn't want to know about strip clubs nor did I have any business in one. Once I got that first "taste" of the place; however, I just couldn't walk away. You may find yourself tired of vampires, or perhaps you don't like the subject at all. I guarantee you'll like this; it isn't what you're used to.

Many readers take issue with flashback scenes, but in this case, I doubt anyone will even notice. They are handled in a timely and well thought out manner, as if in the hands of a master. The plot takes us back and forth from there to present day as if it were a symphony, building towards its ultimate crescendo. Thankfully, the story does not end here, but simply takes a breath, pausing as we prepare ourselves for the next movement in the Blood Brothers series.

Another moment of brilliance occurs as we "see" the best human to vampire transformation I have ever experienced, but I don't want to give anything away. You're going to have to trust me on this one.

On that note, much of the thrill of this story has to do with the reveals. They are not the biggest surprises known to man; however, the plot unfolds in such a way that you may find yourself not thinking ahead, but giving every sight, smell and texture its opportunity to do its work and transport you there.

Last year, the author put up a blog post where he said that he wanted to return vampires to where they rightfully belonged. I can assure you that he has done that in spades. I’m serious folks! As the author himself warns, these are not your teenage sister's vampires. The baton that was brought to us by Bram Stoker, handed over for a fabulous reinvention by Anne Rice, now comes through the murky waters of the vampire romance sub genre, held clean and high overhead by Greg Sisco.