Greetings, Fire Enthusiasts. As always, it is very good to see you... Hmm? Yes, I can see you there. See. *waves* You look great, by the way.

Wow! That wasn't creepy, was it? Practically everyone's got one of those cameras now, so you never know if someone really is staring back at you. I promise that I'm not. In fact, that was what I was trying to tell you. If you're reading this, then that means that it is a new week, second week of January, and I am back to work. Two glorious weeks off and I was sick! Sad, isn't it? Oh, well. There's no use crying about it. My allergies kicked in, as you probably already know. That was Christmas evening. Soon the fever hit, knocking me to the couch for days. I got a lot of dvds watched, but not a whole lot of writing done until week two. You would have thought that I might have caught up on blogging at least, but for several days I couldn't seem to keep too many cognitive thoughts together. So, no; not really.

Actually, I did manage to get some blogging done, and hopefully, many of you noticed me hanging around. I have been putting into practice what I learned at the tail end of last year, which was how much more efficient it is to have posts actually delivered to my e-mail. Now I no longer have to go hunting through time lines, looking for points of interest. Of course, now every time I check my my e-mail I end up having 50 new messages! *laughs* The good news is I can easily manage all of that. Since I can't visit 20 sites a day (certainly not while I'm back to work), I simply visit the posts that speak to me, or perhaps ones where I feel guilt for not having visited in a long while.

When I did feel better, especially during the second week, I began getting up at 7:00 am and hitting trusty laptop while the house was still very quiet for a few hours. While we're waiting for those edits to come in on Dance on Fire: Flash Point, I have set the vampires aside for a while while I work on something to do with ghosts. I have mentioned it before, but I have always wanted to tackle the subject, and things seem to have aligned wonderfully for this to be my next project. I managed to get about 10,000 words done, plus a bunch of research, so we'll see how it goes. For the most part the book is writing itself.

Lastly, I did manage to get a little reading done, too. Last week, I reviewed books by Red Tash and Jerry McKinney. This week, Author Erin Cole's Grave Echoes.

As Amazon's synopsis reads, "The nightmare is real…Kate Waters suffers from narcoleptic hallucinations, which recently involve her unreachable sister, Jev, and a mysterious key. When Kate receives the terrible news concerning Jev's fatal car accident and acquires the strange key from her visions, she unlocks her sister's world of perilous secrets involving witchcraft, poltergeist, and a heartless killer determined to get back what is his. The danger lies in whom to trust.Terrifying paranormal encounters, a trailing wolf, and an attempted murder of one of Jev's friends, forces Kate to turn to the one she fears most, the priestess of Jev's coven, Thea. She challenges Kate's beliefs and provides her vital clues about her sister's murder, but will Kate overcome her fears before anyone else dies? To do so, she will have to trust in a world where the possibilities are unbelievable and the consequences are deadly."

Cole does a masterful job of pairing a paranormal ghost story with a good old-fashioned whodunit. Her protagonist Kate finds herself surrounded by ghosts, a fine mystery and enough potential candidates for our unidentified subject responsible for her sister's death than we can shake a witch's broom at. When I read, I tend to fly through a novel in hope, not of deciphering the mystery, so much as simply enjoying the ride. Perhaps some of you might pace yourself, endeavoring to attempt to solve the puzzle before Kate does. Good luck. Cole does a great job of dangling enough circumstantial evidence and red herrings about that, if you're anything like me, will find yourself convinced of guilt from nearly every character in this novel at one point or another.

I have read quite a few paranormals as well as a few mysteries in my adult life; however, this very well may have been the first time that I have seen the two joined. I worried at one point that the paranormal was going to take a hard left turn toward the end, but that did not prove to be the case. At it's heart, this story is definitely a mystery. There just happens to be enough of the ghosts and dark magic to keep the paranormal fans interested, all the while taking the reader along for a well-written, well constructed and well-plotted ride.

One last thing. Today is the 68th birthday of guitarist, song-writer, producer and Led Zeppelin founder, James Patrick Page. I was a late-bloomer when it came to rock music, missing out on the mighty Zep until introduced at Live-Aid in 1985. After that, I immersed myself in their music and never looked back. They are my all-time favorite band. Because of that, while in high school, many of my friends called me Jimmy Page. One or more still do, all of these years later. So hilarious! 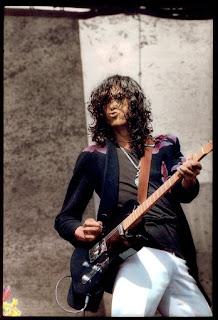 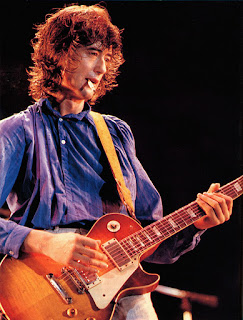 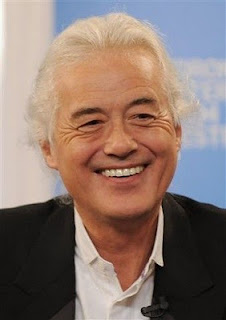