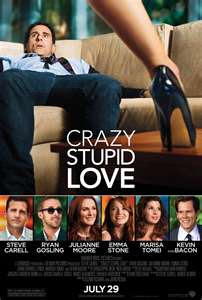 Hello, Fire Enthusiasts. How was the week? Mine was rough, but that's what I get for only working three days the previous week and then attempting to get back in the swing of a five-day week, after having taking off on vacation. Right? It was great, though, and I really appreciate all of your comments. Thanks.

This week I had an article about a new local restaurant which is situated along our river here in the Central Valley of California. The problem was that I had my deadline and I had my subject; however, I could not get a hold of them. Thankfully, just as my editor and I were preparing to punt and do something else at the last minute, I finally heard from them and everything came together quickly. I'm glad it did, not only because I had the deadline, but because it's a great restaurant and really nice people behind it. If you are curious about this magazine, feel free to check it out. It is called Kings River Life Magazine and it's a free on-line mag.

Other than that, I'd like to tell you a little bit about a real good film that my wife and I saw this past Saturday. As you have already guessed, it is called Crazy, Stupid, Love. If you don't like chick-flicks, don't worry. This isn't one! It has so much more going for it than just the run-of-the-mill Rom-Com. 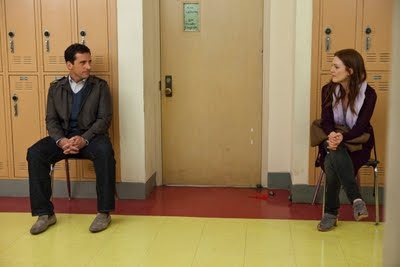 Steve Carell is a husband and father who finds out at dinner that his wife has cheated on him and she wants a divorce. That was pretty much how he got the news, too. His wife, Julianne Moore, doesn't love the coworker that she slept with, but she doesn't love her husband either.

Carell moves into his own place and then begins to pick up the pieces, except he's not doing very well at that. He meets a ladies man, Ryan Gosling, who decides to take him under his wing and shape him up. 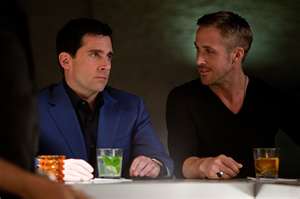 The film is loaded with twists and turns and, were it in the hands of lesser filmmakers, might have turned out very badly, Instead, I think it is a hit. 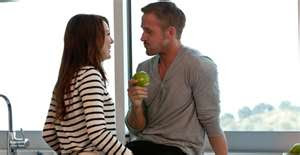 Kevin Bacon is the coworker who wants to be the new man in Moore's life. Emma Stone is the woman who meets Gosling, but spurns his interest, instead choosing to wait for her boyfriend's proposal (a surprising appearance from singer Josh Groban). Carell's son is not-so-secretly in love with the family babysitter, who in turn secretly loves Carell. You can see how this could have gone badly, but I promise you that it all works. I have purposely left spoilers out. I'm usually great at anticipating those, but was floored at some of the things that take place. 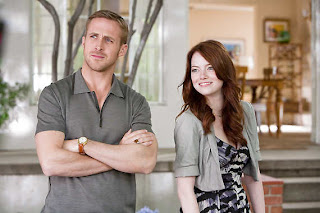 Do yourself a favor, if you have not yet already done so, and see this film.