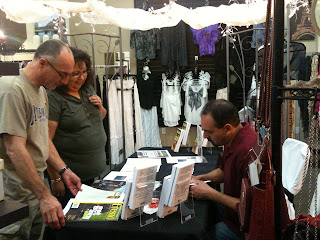 Hello Fire Enthusiasts.
How is everyone? You know, I feel badly that I have done such a poor job of visiting your blogs. I typically see many of you on Twitter or Facebook and that’s great. However, one of the reasons why I left my spot at Wicked Writers was to free me up to do other things. I have been less successful with blogs, but I’m endeavoring to improve. 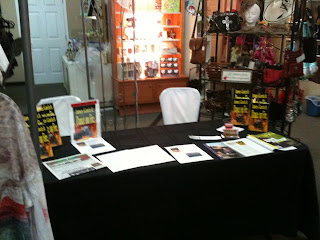 One of the reasons why I have been so busy is because I have really been doing a lot of events. Some of you may have seen a post or two concerning this fact, perhaps not. I have been asked to share how some of this has come about, so I’d like to take a few paragraphs to explain, if I may.
First of all, be aware that my ground is fertile. I wrote a vampire novel which takes place in my hometown. Not only did I mention Kingsburg, California, but I also used the neighboring towns and did a fair job of mentioning the valley in which these communities are located. I didn’t always feel that way about my area. People did not seem to notice me until I began doing events. I just want to make sure that folks understand because it isn’t the same thing as having written a western in Hawaii, for instance. 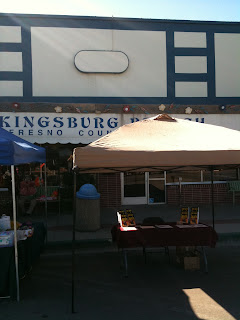 In any event, here’s how I have been able to start signing books:
Year One.
I spent the first year attempting to build a presence on the ‘Net. I covered most of the social networks. At some point or another I began writing for three blogs. During this time I garnered some reviews there. Six months into this effort, I had my local high school as well as a local magazine review the novel. The magazine review opened up an opportunity to write articles as the Kingsburg Beat Writer for a local on-line magazine that had just started up. Anticipating the soft cover version of the novel coming out, I joined the Kingsburg Chamber of Commerce and attended mixers.
Just as the first year was coming to a close my novel came out in soft cover. I began giving and selling copies, as well as attempting to garner reviews with it. I am in the first six months of this second year and I have been covered by my city newspaper (the Kingsburg Recorder), briefly mentioned by the newspaper in the largest city in my area (The Fresno Bee) and now reviewed in this month’s issue of Fresno Magazine. 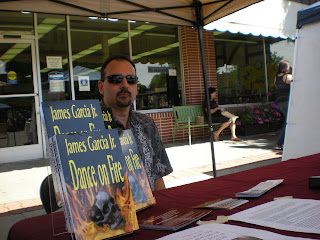 Six Months into Year Two:
Being a member of the Chamber allowed me the opportunity to sell my novels in their building. I then partnered up with Pamela’s Boutique, a local shop in town. I had met the owner at my first mixer and she offered to sell copies in her store. Working for Kings River Life Magazine gave me an opportunity to attend my first library event. Then it was time for the annual Kingsburg Swedish Festival, a street fair of sorts that is the main draw of the year for us. I had a booth there and sold about 30 copies. Next, a wonderful group of ladies picked up my novel for their book club and then invited me to come and share my story with them and talk books. Recently, I had what promises to be the first of many author events at Pamela’s. I sold another 13 copies there. 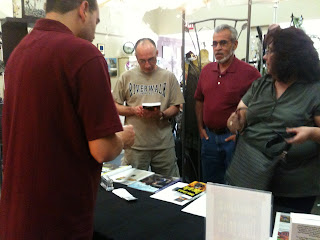 The Next Six Months:

Armed with the excellent review from Fresno Magazine, I marched up to Fresno to speak with the big three: Barnes & Noble, Borders & Bereans. So far I have hit the corporate wall. They want me to e-mail corporate offices, see how many copies I’m selling and to know about return policies, etc. Vamplit Publishing is a new company which is building a firm foundation for itself and has a great stable of authors; however, we are not yet in a position to meet some of these requirements. I’m thinking that I’m going to back off a bit and focus on the smaller book stores in my area. I’m guessing that they will be more receptive. I have another library event planned for next month in Kingsburg, too.
So this is where I find myself, my friends. Things have gotten really exciting. The sequel to my first novel should be coming back to me shortly so that I may make some corrections. It should be published this year in both e-book and soft cover formats. I have already begun planning book three, although I am torn between wanting to pen book three of the trilogy and wanting to write something different. 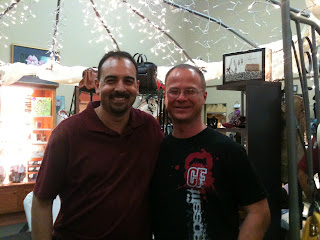 (That's my great friend Mike, who I have known since grade school. He and his family came down to visit his parents and kept the surprise from me until he walked into the shop. Seeing the Graham family was the highlight of the night.)

As always you will be among the first to know.
Thanks so much for your interest, support and constant enthusiasm.
We’ll talk soon.
Posted by James Garcia Jr at 12:01 AM