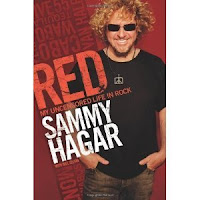 I’m, sorry. Today’s post is about rock musician Sammy Hagar, so I couldn’t resist borrowing his opening from the song, “Good Enough”. It was the first song on the first album that he made with Van Halen, 5150. For some of us, we had yet to hear anything from the new group and many were unsure whether they would be any good anymore without Diamond David Lee Roth. When those two words opened the album, followed by Eddie’s horse-sounding guitar effect, it really grabbed our attention. Speaking for myself, I recall being shocked at how fantastic the album was. I started calling my friends before I had even flipped it over to side two. [Editor’s note: I know Sammy stole the idea from The Big Bopper, by the way. Please, no hate mail.]

In any event, I just bought and devoured Sammy’s autobiography, Red: My Uncensored Life in Rock. It only took three evenings for me to finish that book. I grew up listening to man, so I was keenly interested in everything from his stints with Montrose, Van Halen, Chickenfoot and all of the solo work that he has done. I have seen him perform in the Fresno, California area four times: the For Unlawful Carnal Knowledge tour with Van Halen, the Balance tour with Van Halen, the Marching to Mars solo tour and last year at the Big Fresno Fair. I didn’t see him there, but I have had the pleasure of visiting the Cabo Wabo Cantina down in Cabo San Lucas, Mexico. I have nearly every album/CD of his, and where I don’t, I have all of the best cuts from iTunes. 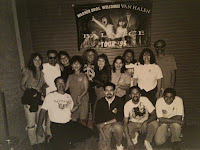 The above photo was taken behind Fresno's Selland Arena. The band is standing across the back row from left to right, Eddie, Sammy, Michael and Alex. That's me kneeling in the middle of the front row. Standing on my left shoulder is my wife's niece, Lee, followed by my sister in law, Imelda. Kneeling on the end and in front of Alex Van Halen is Lee's husband, Daniel. I just wanted to give them a shout-out.

The book was an extremely fascinating read and went very quickly. I suppose many books are really simply recordings that are later transcribed and this was no exception. The co-author, Joel Selvin, seemed to simply write what Sammy said and cleaned up very little, if anything. Having heard many interviews and attended many of his shows, I am extremely familiar with Sammy’s conversational style, so it did not take long to put myself in the room with the man as he recounted his life’s story.

The book begins with a foreword from Michael Anthony, the long-time, but now former base player for Van Halen, who became fast friends with Sammy. In it, he details how he met the brothers and then eventually Sammy, and how it all fell apart. “He is the most upbeat, positive guy in the world. He loves life. He only happens to be a singer and play music, too. And another thing-he’s no bullshitter. If Sammy says it happened, it did.” I knew before beginning the book that it was something that was only going to tick off Eddie Van Halen further, but after reading what Anthony had to say, my appetite for the book was whetted.

It is hard for me to believe that Sammy does anything but tell the honest and bitter truth, whether it be the amount of partying, his life with his first wife that was so difficult for everyone, the dirty details on all of his philandering, to the relationships with all of the rock royalty that he came across over his long and continuing career. When I read those words, it seemed to me to be one of the most genuine things that I have ever encountered; he sugar-coated nothing. When he was an absolute idiot, he told us so. He details his bad decisions and seemed to give all credit where it was due.

What I really loved about the book was the behind the scene moments, such as when he bumps into famous rockers like Van Morrison, Sly Stone, Miles Davis, Stephen Stills and a couple of the members of The Grateful Dead which were fairly hilarious moments.

Other things that I ate up were the moments of inspiration when a creative spark brought a song out of nowhere. “One night, on the drive home,” Sammy said. “I was listening to this tape where Eddie had written the music and noodled the verses on guitar. He was trying to show me the phrasing of the verses, but he couldn’t, because he couldn’t play the rhythm of the thing, and I started singing it in the car. We didn’t have a chorus, and I just busted out with it, 'Best of Both Worlds'. It hit me hard, right when I was pulling in the garage. Bang. The chorus hit.” I would have loved to have seen more of that, but overall, Sammy does a great job of going through all of the highlights of his career.

I was amazed that Sammy totally expected the phone call that he received from Eddie Van Halen. He told his wife about it. "'They're going to call me, you watch.' Who else were they going to get? There was Ozzy Osbourne, Ronnie James Dio, and me."

If you follow music closely, you no doubt have already heard the stories that Sammy claims to have been visited by aliens and that they either uploaded or downloaded something into his brain. It has been all over the Internet and social networking. When I got to that part of the book, I had to stop and make certain that I had read it correctly. I'm rather indifferent to the whole alien question, neither believing or disbelieving, so I just giggled and continued on my way. I just wanted to know about the music!

I loved the book; however, I cannot recommend it for everyone. It is definitely not for anyone under age because it was definitely uncensored. In fact, I wish it had been a bit censored. I could have done without all of the sordid rock star/groupie details! I couldn’t have also done without the rock star language, but I suppose it is what it is. If you are anything like me, and love Sammy’s music, whether it be in a band or as a solo artist, grab a copy of this book, pour yourself a Waborita and sit back and relax. You won’t be getting up for a while.

Unless it’s to pour yourself another drink.