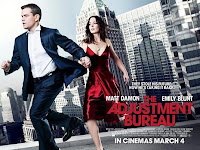 Hello, Fire Enthusiasts. I just wanted to share with you the film that my wife and I saw this past weekend: The Adjustment Bureau.

Last year, over on the Something Wicked This Way Comes blog, we were asked to submit what film we were eagerly anticipating for the coming year. I know I should picked out some horror film, intriguing drama or Marvel film, being that I was such a comic book nerd when I was a kid. I still have a shelf full of X-Men, Daredevil, Thor, Captain America and The Avengers, to name a few. with all of the Marvel Studios films that have been coming out these past few years, you would have thought that I would have been stoked for one or more of those for sure.

Instead, it was this film that caught my attention. It had little to do with Matt Damon starring in it, although I do like his work. Though I am enamored with Emily Blunt, she wasn't necessarily the reason either. I'm not a huge Science Fiction guy, so the fact that the film was based on the writing of Phillip K. Dick, the great writer whose work eventually brought us the films, Blade Runner and Minority Report also wasn't the big factor. So what was it exactly?

The Adjustment Bureau, for those who are unfamiliar, is the story of a secret group whose sole purpose and responsibility is to keep tabs on human kind and make sure that they do not destroy the world. Okay, that might be overstating things a bit, but one of those chasing Damon's character and Senate hopeful, David Norris, told him exactly this as they revealed themselves to him. 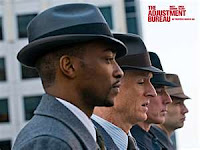 The man, played by Mad Men's, John Slattery, tells him that when their group stepped back and allowed humankind to govern themselves, it led to the dark ages. Stepping back once again much later led to wars, the great depression, etc. Had they not stepped in that last time, during the Cuban Missile Crisis, mankind might have finally done themselves in.

You see, David Norris, is four elections away from the white House. He was directed to bump into Emily Blunt's character, Elise, only to give him the necessary push to help him deliver a great speech on the eve of an election loss, thus propelling his career. He was never supposed to see her again.

When he does bump into her again, it supposedly causes ripple affects which the bureau cannot allow. They reveal themselves to him, and warn David never to reveal their group to anyone, lest they wipe his mind. Not only this, but promise that seeing Elise will ruin her "plan" as well as his own.

The reason that I loved this film was because it had a perfect balance of drama, humor, intrigue, science fiction and romance. I love that! It had good direction and quality, but not overdone special effects. It also had a great supporting cast which also included Terrence Stamp, and a scene-stealing Anthony Mackie, as well as some cameos from well-known personalities from the world of politics and the news. 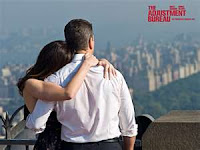 If you like stories with a great combination of everything like I do, then I think you should plan to see this film. It has been out for nearly a month now in the US, so don't take too long.