What kind of monster are you?

Greetings, Fire Enthusiasts. Considering it's October and we're building up to some very cool events for Halloween, I thought I would post a bit more frequently than I typically do.

The following is a slice of my first novel, Dance on Fire. It's the story of a vampire who unwittingly becomes a part of a family, after saving a mother and her twin toddlers from the notorious vampire who turned him centuries before. The woman is a Christian who comes to believe that there is good in the vampire, and that God can still use him. He disagrees, convinced that undead flesh has no place in God's kingdom, no matter what he does. Barbara is convinced, however, and her persistence begins to seed doubt in Nathaniel's mind.
It is the book that kicks off a crossover series. I promise not to hit you over the head with the Bible, but I do use it to flavor my story. This isn't your mother's Christian fiction as you will see, so I'm careful not to label it that way. It is horror, and if you like dark fiction, I hope you'll give it a look. I have edited it down here for the sake of time...

Lainie Bishop had had an extremely rough week. It had begun with two police officers, that she had known well, dying horrible deaths during her shift. She remembered speaking to them, and a short while later, they were gone. It had taken her a couple of days to get her legs back beneath her. She missed work and didn’t speak to anyone, not even Jeremy. She had only been seeing him for a few weeks, and although she could definitely feel the love beginning to swell between them, she needed some time to heal from the pain of losing those officers that she had been responsible for. Both he and her dad phoned her several times a day during the entire time that she had been off. It bugged her, but she could never be mad at either one of them so she endured it. Her dad phoned a couple of times last evening as well, so she finally drove over and had dinner with him before she went off to work.
It was not something that she had spent any real time deliberating about, just a back of her mind kind of hope that she could simply get re-acclimated with one quiet and by-the-numbers kind of night. She knew that the city was being supported by members of other police departments, and that was going to be more work for her, having all of these patrol cars crawling all over town. Still she hoped for the best.
Unfortunately, on her first real night back behind the desk, she was hit not only with chaos, but well more than that. Now, she found herself being sent home.
She pulled her 2000 Volkswagen Beetle slowly out of the parking lot and her eyes followed the front entrance of the police department as she slowly crawled forward toward the street. Just then, she noticed a tall shape on the sidewalk. Anywhere else she may have ignored him and continued on her way; however, although she was being ordered off the premises by Detective Lopez, that did not make her any less an officer of this city, and she would continue to do her part. No matter what.
“May I help you?” she asked, opening the driver side window.
“I sincerely hope so, my dear,” the odd-looking man said. “I am looking for four adults, one child and two babies.”

Michael Lopez surveyed the blinking lights and listened along for radio traffic. There wasn’t much. He had lowered the volume so that it would not distract them from any local noises. He was surprised that not one of the multiple patrol units or even members of the fire crew had attempted to make any form of contact with the dispatcher. Since the current dispatcher was no doubt making plans to curl up in bed for the approaching day, and the fact that he was too exhausted to fill in for her, he was glad that no one seemed interested in following them.
“Michael,” Nathaniel spoke up. There was a directness to the tone.
“Yes.”
“It is time.”
Michael spun. The vampire had found them. He was staring at them through the thick glass at the front entrance, his nose pressed firmly against the glass. He stood there like some statue that high school kids had removed from a rival’s park and placed there to scare the graveyard dispatcher.
“Shit!” Michael whispered.
“My sentiments exactly.”

Vincent continued to stand unmoving against the glass front door, staring at the occupants of the room like that statue. Nathaniel studied him. The sunrise was about an hour away, but he did not seem to be concerned about the time. Perhaps he simply knew that he had more than enough time to accomplish whatever it was that he intended, which was no doubt as black as his shriveled heart.
“Go back with the others!” Nathaniel ordered.
“No!” Michael replied. “I’m not going anywhere!”
“Not you.”
Nathaniel didn't turn around, but could see as Michael did so to catch his partner who was now standing against the door frame at the mouth of the hall for support. It was Mark that Nathaniel had been addressing. He had sensed him join them.
“You are not yet ready,” Nathaniel said.
“Would you like me to come back tomorrow when I am, or the next day?” Mark replied.
Nathaniel heard him take a few more steps into the room, no doubt to get a better look at Vincent. He did not answer his sarcasm. It was true that it might take every one of them to subdue Vincent in order to destroy him once and for all.
As if on cue, Nathaniel saw Vincent begin to move. He was retrieving something from his right pants pocket. It took him no time to remove the set of objects and to begin to try each one until he had found the magic one which would do the trick.
Nathaniel saw Michael creep closer to the large front window which separated the Dispatching Center from the Lobby and strain his eyes to see what Vincent might be doing. The glass was five feet high from counter to ceiling and twelve feet across from north wall to the pedestrian door on the south. Michael stopped when he reached the counter. “What’s he doing?” he asked.
“He has keys,” the other two in the room answered in unison.

At long last, Vincent had located the correct key, turned it in the lock and gained access. Before entering fully; however, he leaned toward the ground with his left hand and retrieved something. Michael could not make out just what it was. While Nathaniel held his ground beside him, Michael glanced nervously from door to door, deliberating and calculating in his head whether or not he believed that the last door between them and the vampire might hold. It seemed too much to hope for.
When Michael tore his mind away from the what if’s and what might happen, Vincent had reached the other side of the large lobby window.
“What’d he just drag in here?” Michael whispered the question. He waited for the reply, but none came. “Nathaniel?”
“You may wish to turn away.”
With still surprising little effort, Vincent reached up and slammed an object against the glass. Michael cursed in horror as the lifeless body of Lainie Bishop struck the glass with her back and head. The blow did nothing to the thick bulletproof glass, but it collapsed several of the plates that had once made up her beautiful skull. There was a sickening squashing sound as some of the contents inside were loosed. Yet, there was very little blood.
For good measure, Vincent pulled her down and slammed her three more times in some sick, twisted rhythm as if she were simply the door knocker of an even larger castle.
“She did not seem pleased that she was being sent away,” Vincent broke the silence between them. “So I decided to invite her back inside.”
“My God!” Barbara cried as she entered the room just in time to witness the carnage. “What kind of monster are you?” she screamed, unable to hold back her outrage at the sight of the dead woman’s hanging limbs. Whatever blood she had remaining stained the glass in dark splattered rivulets.
All three in the room turned to look at her as she did so. Michael wondered just the same thing. Though he and Mark had already seen and tasted some of what the vampire had been capable of, only Nathaniel really knew what the monster was like.
Michael swallowed hard.
For it was all there—the proof of the monster Nathaniel considered Vincent to be—written so clearly in the stark horror on Nathaniel’s face. 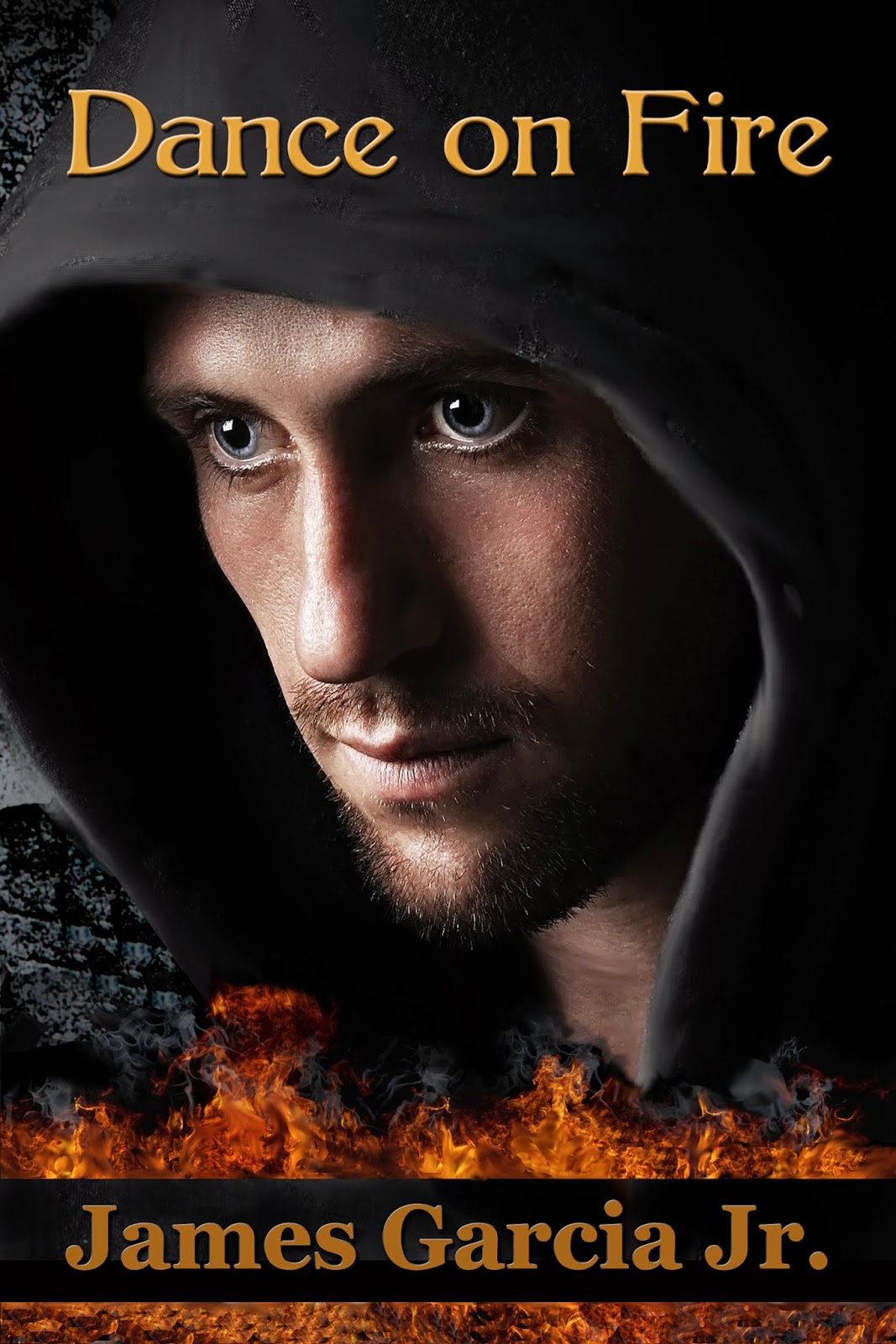 This scene takes place at the end of the novel. In Dance on Fire: Flash Point (book 2), the vampire Tiffany returns five years later to enact revenge upon Nathaniel and his extended family. I am currently in an editing stage on book 3 in the series, and hope to have it published early in 2015. All my books can be found on Amazon.

The e-book for Dance on Fire is only 99 cents at Amazon.