The Next Big Thing

Hello, Fire Enthusiasts. With my second novel set to drop any week now, you'd think that I might be coming to you to promote it; however, instead, I am here to discuss the novel after that. I guess I'm weird that way!

Not really. Well, yes, I am, but that's not what I mean. You see, one of my sweetest pals on the planet happened to tag me with something they call The Next Big Thing. I do have a book coming out this October, the sequel to my debut vampire series, Dance on Fire. The sequel is called Dance on Fire: Flash Point, but you probably already knew that. Unfortunately, I am not allowed to speak of that one. I'm supposed to speak of the next one...

1)  What is the working title of your book?

The book is currently entitled Ghosts. It deals with both the literal as well as the figurative kind that can haunt us.

2)  Where did the idea come from for your book?

I love a good ghost story and have always wanted to write one. You may have read previously from me that I only take on one writing project every year or so, due to my schedule. Call it my muse, the gears in my head or an idea I caught out of the air - which is where I usually tell people my ideas come from - but I finally have something worth proceeding with.

3)  What genre does your book fall under?

I write horror, but one of my true loves is the Romantic Comedy. Therefore, you will find that I am leaving vampires momentarily to enter the paranormal romance arena. The book will be loaded with frights, but will delve into the sad suffering heart of our protagonist and see whether he might be able to love again.

4)  Which actors would you choose to play your characters in a movie rendition?

My friends, I'm skipping this one. I don't want to get in trouble for using photos, nor do I have the time to dig some up. Perhaps when I get closer to publication this might be something worth doing, but for now, we're moving on...

5)  What is the one-sentence synopsis of your book?

Alone for a week in an old mysterious house he just inherited, widower Paul Herrera finds himself surround by ghosts, both ethereal and those that haunt his memory, as he struggles to hold onto the only thing that he has left in this world: his sanity.

6)  Will your book be self-published or represented by an agent?

Now that I am on my own, I will continue to press forward as an independent.

7)  How long did it take you to write the first draft of your manuscript?

I wrote the first draft of the novel in about three months or so. It currently sits at about 72,000 words. My two vampire novels came in at the 110,000 word mark, so it didn't take that long.

8)  What other books would you compare this story to within your genre?

Sadly, you've caught me on this one. I don't really read this genre, so I'm afraid I have committed the sin of not knowing the competition as well as I might otherwise. However, having told you that, I know the names of the authors out there and the books they write, and I think I'm pretty safe. Although I am struggling to find the audience for my vampire series, I am very excited to get this novel out into the marketplace.

9)  Who or what inspired you to write this book?

Once again, my heart loves to be engaged with a book or film as long as the subject doesn't come off as sappy or melodramatic. Since I like to be scared and have my heart-strings tugged on, it seemed like the perfect pairing to me. There was no one person or event that inspired the book. It is simply something that I would like to read, so I'm writing it.

10)  What else about your book might pique the reader's interest?

If you know how I write, you know I like the elements of horror that put an audience on the edge of its seat. What I don't appreciate is blood, gore or torture for the shock value. I also do not need to be in the bedroom with the characters. I've been in my bedroom and have fathered a couple of children, so I understand how it works. *laughs* With Ghosts you can expect to be scared, feel great sadness and hope that love will ultimately have its way.

Thanks for stopping by, everyone. If you feel like playing this particular game, then consider yourself tagged. I also need to thank Adriana Noir. She's a great friend, exceptional writer herself, invaluable ally and a lovely human being in every sense of the word. Hugs to you, Adri, as always. You can visit her at her website and really should.

Oh, before I go, you may have already noticed that I am changing things up a bit. I don't know about you but I'm sick of the same old "author" photo. I've been flying with it since early 2010. I can't stand it when the shampoo bottle changes seemingly three times a year; however, I haven't sported that beard in two years thanks to staring at the photo for so long. Lol! What do you think about this one? My wife took it, as you can well imagine. I think it's more faithful to the person I really am than the serious leather-jacketed one I've been using. I hope it works for you. 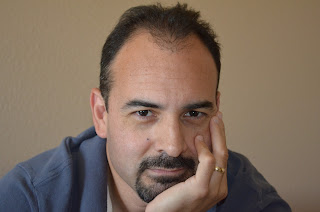