Hello, Fire Enthusiasts and Coffin Hoppers. Thanks for stopping by. This is a big day for me and I appreciate you having taken the time. My first novel, Dance on Fire, took twenty years start to finish. That, however, is a very long story. If you just met me, you may not know my story, but we’ll save it for another time. My second novel, which is having its big release today, also had its share of drama. Suffice it to say that I was unsure that this second book in my crossover vampire series would ever see the light of day. I am overjoyed that it has, and I hope those of you who have read my first novel, or simply like this genre, will share it with me.


I may have written it, but I was not alone in the production. I want to thank the artist and author, Sue Midlock, for her work on the cover; my old school mate, Mike Graham, and the author, Adriana Noir, for their beta reading. And I want to thank the editor and author, Natalie Owens – who never would have allowed me to begin this sentence with “and”. When you discover that this novel “sings”, I assure you it was because of her hard work. I also thank the authors Marissa Farrar and Carole Gill for their endless support and encouragement. There are more people to thank, too, but this post is long already. It’s a fantastic community of writers and readers out there, and I thank all of them (you).


During Coffin Hop 2012 which ends at Midnight on Halloween, I am giving away several copies. In order to entice you to ask for one or to surf over to Amazon.com (US or UK) and buy one, I offer the following tease…


“Nathaniel!” came a bloodcurdling scream. It was an ancient voice, one Nathaniel knew all too well. It seemed to shake the very foundation of this sad, dilapidated barn which had served as his home.


Nathaniel pushed away the layers of old musty blankets and, taking one for himself, climbed to his feet. The sun wasn’t yet strong in the early morning sky, but it was more than enough to destroy him. Using the blanket as a shield, he approached a broken window that had fallen into disrepair and, in fact, been neglected just like the abandoned barn. He glanced outside and then quickly moved away, processing the gathered information from the safety of the second floor shadows.


He had seen nothing of significance. Instead, hearing only the early buzz of the new day, Nathaniel turned and headed down to get a better look. Draping the blanket about him like a cape, he leapt from the loft and nearly fell in a heap amongst the shadows at the foot of a rickety ladder.


Rising to his feet, he turned toward the place in the barn where he had left two sabers embedded through the wall. Vincent, the great beast, was on the other side of that wall, the two blades piercing his horrid flesh and pinning him there to await a terrible end.


Only, there was nothing there where the scarred blades should have been poking through.


Nathaniel felt something inside him sink into the pit of his very bowels, as if it were still possible to feel such things, and he absently dropped the blanket. With little regard for his own safety, he ran to the spot, literally throwing himself upon the wall. It shuddered as if it might give away, but didn’t. Frantically, he searched, willing his vision to penetrate the many cracks in the old boards and beams, but unable to see anything except the outside world.


As if sensing the presence of undead flesh, the sunlight—like tiny yet powerful laser-beams—prodded him, singeing whatever flesh they happened upon. Skin snapped and cracked open, revealing gray meat; hairs fluttered into tiny plumes and floated off into the morning air.


By the time that Nathaniel realized what was happening to him, he was already in awful shape. He winced at the pain and the smell of himself coming undone, but didn’t immediately retreat to safety. Numb to the destruction, he worried about more devastating concerns. His thoughts quickly turned to Barbara, Michael and their children, not to mention Vanessa and Mark.


Ultimately, he did retreat, but not for self-preservation. He was still hunting for Vincent.


Nathaniel could pick up no trace of Vincent’s presence. He could only smell the horrible odor of his own flesh burning about him. He moved right and left, still frantically looking for any sign of the other vampire, yet finding none.


Eventually, Nathaniel’s panic led him to another neglected window. It was covered in thick cobwebs, but not enough to keep him from seeing the sign that tore into him far worse than any measure of sunlight.


In the clearing, which had once stood as a driveway to the old barn but was now overrun with weeds and dead tree branches, lay the US Calvary Sabers. They had been cast aside. Nathaniel threw himself upon the window frame, letting a wave of sheer horror wash over him. The stained and filthy glass cracked, but he took little notice of it.


How he had managed to get free, Nathaniel didn’t know. He only knew that he was. It had taken the combined strength of many to subdue him, but apparently it wasn’t enough to slay him. Perhaps the vampire couldn’t be destroyed, and there was nothing standing in his way. He would kill them all, to be sure. He would avenge himself upon each and every one of them.


And he would savor doing it. 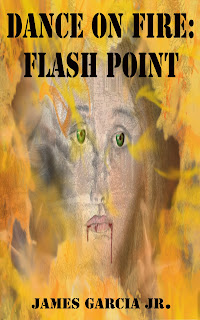 You don’t know how much of a tease I really was just now, but I hope you will get your hands on a copy at some point and see just what I mean about that.


This has been a crazy trip, getting to this day. Thanks for sharing it with me. Thanks for being supportive and encouraging, or for just being a friend.