Hello, Fire Enthusiasts. It’s so good, as always, to have you drop by. As you know, I typically only post once a week on Mondays. The good news is I only have to spend my week dreaming up one topic for discussion. I don’t know whether you’ve noticed, but I love it when I don’t have to talk about me and my writing. I mean, I’m a writer. You know this. I don’t have to tell you that. My book is there in the top right corner. I’d love it if you bought it and said something nice about it on Amazon. It’s pretty good, in fact. Notice I didn’t say it was the greatest thing since apple pie. Apple pie is fairly tough to beat in a contest, you know.


In any event, I’d much rather talk about someone else’s book, and today I get to do just that. Please welcome my buddy Jenny Baranick. She is the author of the new book, Missed Periods and Other Grammar Scares: How to Avoid Unplanned and Unwanted Grammar Errors. She caught your attention with that title, didn’t she? That’s because what she brings to the table is fresh and innovative. Here’s the Amazon blurb: 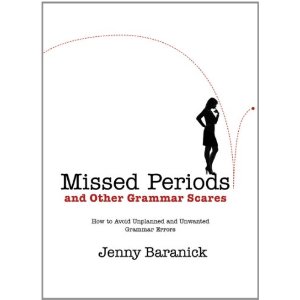 Grammar has finally let its hair down! Unlike uptight grammar books that overwhelm us with every single grammar rule, Missed Periods and Other Grammar Scares is like a bikini: it’s fun, flirty, and covers only the most important bits. Its lessons, which are 100 percent free of complicated grammar jargon, have been carefully selected to include today’s most common, noticeable errors—the ones that confuse our readers or make them wonder if we are, in fact, smarter than a fifth grader. What is the proper use of an apostrophe? When should an ellipsis be used instead of an em dash? Why do we capitalize President Obama but not “the president”? And why is that question mark placed outside of the end quote?

Author Jenny Baranick is an English professor whose students can’t believe she’s actually that into grammar. Upon experiencing the joys of grammar at an early age, raising grammar awareness became Jenny’s raison d'être. By spreading her remarkably user-friendly and hilarious approach to grammar, she hopes everyone will experience the satisfaction of a properly placed comma, a precisely used semicolon, and a correctly deployed en dash.

Missed Periods and Other Grammar Scares shows grammar as it’s never been seen before: uncomplicated, laugh-out-loud funny, and, dare we say, a little risqué.

Show Less
I stumbled into Jenny's class, so to speak, sometime in 2010, when I happened to find her insightful, intriguing and always hilarious blog. Since that first read I have been “signing up” for her class every week. Welcome her to the blog, won’t you.


Me: Hello, Jenny. I really enjoy what you do on that blog of yours and am very excited to see your new book. How and when did you decide that teaching English was what you wanted to do with your life?
Jenny: Thank you so much for liking my blog and being excited about my book. When I was in 11th grade, I had an English teacher, Mrs. Rippe. On one of our exams, she included an extra credit question that asked us to analyze an Emily Dickinson poem. I sat there and stared at the words and they meant nothing to me. Then, magically, all of a sudden, the meaning opened up to me, and I was so excited and I realized that I wanted to help others unlock the mysteries of literature. However, because I work at a fashion college, the students are only required to take English Composition, so now I help them unlock the mysteries of the comma and the thesis statement. Not quite as sexy as poetry.

Me: When given the choice I gravitated toward English and creative writing classes; however, I’m terrible at the rules of grammar. I usually only “luck” into getting my sentences correct. What is it about grammar that gets you so excited?

Jenny: Grammar excites me because I was the same as you. I was a big reader, so by osmosis I got by grammatically in college. I’d get a few red marks but not enough to affect my grade. Then, I was assigned to teach a remedial English class that focused on grammar, and I was cocky enough to think that I could just wing it. And then something horrible happened: the students started actually asking questions, and I was stuck. I couldn’t explain why, for example, a comma went there; I just knew it did. So it was terribly embarrassing, and I studied my butt off during the quarter break only to realize how liberating it was to actually know the rules. I no longer had to rearrange sentences because I wasn’t sure if a comma went there or not, and, even more exciting: I learned the purpose of a semicolon. I want everyone to experience that sense of liberation.


Me: How and when did you get your start blogging? Did you have any inclination that a book might come out of what you were doing on the blog?

Jenny: The idea for the book came before the idea of the blog. I started the blog to get a platform for the book. However, I don’t think I could have actually written the book without the blog because blogging is how I actually discovered and gained confidence in my writing voice.


Me: What has been the process of getting your book produced? What roads did it have to take in order to see the light of day?

Jenny: It has been a long road! I think I saw a draft from 2008 the other day. When I started the process, as I’m sure is the case with many writers, I didn’t know about querying or proposals or any of that. I think perfecting the proposal took almost as long as the book. And there was so much rejection! I had agents telling me that no one would want to publish a book like this, that they liked the concept but not the way it came across on the page, that they thought I was ugly and worthless (okay, not really, but that’s what it felt like). After MUCH revision, it all finally came together. The day I finally got my agent, Neil Salkind—who has been wonderful to work with—was up there with the day I found out Johnny Depp was back on the market.


Me: BB King named his guitar Lucille, but has had many. Tell us what you’ve done to your car and explain why this version is not the original either. 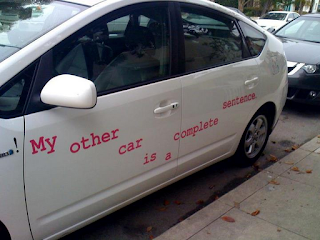 Jenny: One morning I was getting coffee and my dilapidated 2001 Toyota Corolla was parked next to a shiny, new Prius. And, although I’m not a car snob, I’ll admit it: I had a moment of superficiality. I wanted my car to be pretty, and somehow my stream of consciousness went from “I should paint it” to “I should transform it into a grammarmobile” in about ten seconds. (And that was before the coffee!) So I got obsessed with the idea and thought it would be a great way to promote myself, so I stuck funny grammar sayings all over my car. Then, I got into a car accident and my car was totaled (I was fine). But it all worked out because I took the money from the insurance and bought a shiny, new(ish) Prius. And, then, of course, I turned her into a grammarmobile. What should I name her? 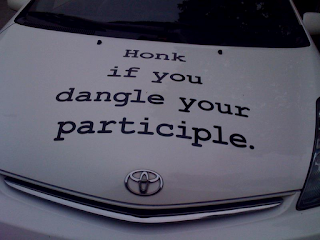 Me: Where do your ideas come from? Do your students make you sign a confidentiality agreement, just in case they do something terrible for fear it will become fodder for your blog or perhaps book 2?

Jenny: Many of my ideas do come from my students’ errors, but they don’t make me sign a confidentiality agreement because—and herein lies the problem—grammar is the last thing on their minds. My students know I am the crazy lady who drives the grammar car, and many of them know I wrote a book. However, they’re fashion students, so they’re like call me when you’ve started your own fashion line.


Me: You remind me of a good preacher who has a point he or she wants to make, but catches your attention with something else, only to swing you around to see what they wanted you to understand. Have you always had this skill or did you have to work at it?


Jenny: I borrowed (okay, copied) this technique from the author Tom Robbins. I was always so tickled by how he would start a chapter discussing something and weave his way into his actual point. I loved the surprise of where I landed. I love surprises.


Me: What do you do to “let your hair down” and have you had much opportunity for that as you gear up for your release day?


Jenny: Oh, you know, sky diving, space travel and ultimate fighting. Okay, the truth is I am boring. Obviously, I like to read and write. I also like to do yoga, play piano, thrift shop, and do the Sunday LA Times crossword puzzle.


Me: Finally, the stereotype is teachers should be given a shiny apple, but you would rather have your students stand on their desks and salute you as their captain. Care to explain? 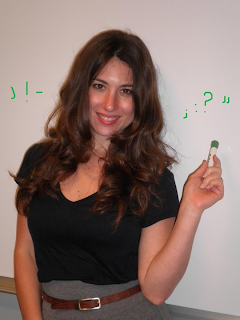 I’ve had a great time spending a few moments with Jenny and hope you have as well. Do yourself a favor and sign up for her class. I guarantee it’ll be your favorite, and you’ll find yourself clamoring up onto your desk and shouting her name in no time. You can find her on Facebook, Twitter and her blog. Don't forget to check out her book.
We’ll talk soon.