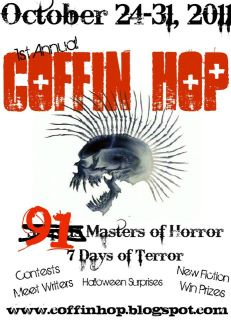 Yes, that’s what I said. Since it is the build-up for Halloween, I thought this would be a bit more appropriate than the usual.

First of all, allow me to take a moment to apologize for disappearing off of the face of the planet these past few weeks. Everything was fine. There was nothing to worry about, and I will be explaining it all in another week. In any event, I'm back, and very excited to be participating in the first annual Coffin Hop.

This week we have nearly 100 blog sites, hosting all of your All Hallow's Eve thrills and chills. We've got shorts, book teasers, quizzes, scavenger hunts and so much more. Perhaps most importantly of all, each and every one of the sites is hosting giveaways. I will only be posting Monday, like always, giving everyone plenty of time during the week to visit all of the sites. The hope is that you will feel as if you just got out of Disney's Tower of Terror ride, escaped with your life like George and Kathleen Lutz from 112 Ocean Avenue in The Amityville Horror or are simply the last person standing at the end of any horror film - whatever floats your boat! You should also be walking away with some great stuff, too.

That is, if you actually get away. [Cue Maniacal Laughter]

This week I am sharing a very brief snippet of my debut vampire novel which was published by Vamplit Publishing. The e-book was published in February of 2010. It has been getting very good reviews, both on the web as well as in print, and we're very excited about that. It is currently tied for the highest-rated novel in the horror category in the Smashwords store. I promise you that you will definitely survive the experience. 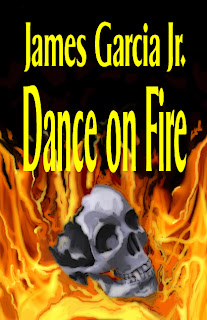 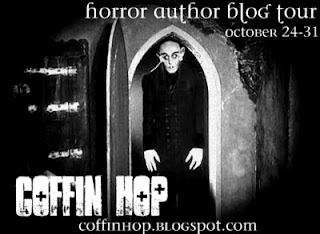 How to win:
What one needs to do to win one of these is to comment here and tell me that you'd like to be entered. Secondly, post somewhere about the Coffin Hop so that others will find us. Lastly, please leave your e-mail address so I may contact you. YOU ONLY NEED TO PROMO FOR THIS ONE TIME AND HOWEVER YOU CHOOSE.
If you are on on Twitter: promo the main page and include @danceauthor so I will see it.
If you are on Facebook, Google+ or a blog: paste one of our cool posters on your page and tell me about it. I'll find it. You do not need to visit each site along the tour, but we encourage you to visit as much as you can. You won't be sorry.
If you are one of the sites participating this week, you are eligible to win, and do not need to worry about promoting because you are already doing that. Just remind me.

So that's it. Visit some sites, grab some bling and meet some new people. I'm looking forward to joining you...until the end.