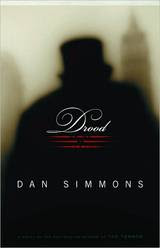 Greetings, Fire Enthusiasts. I come before you today to inform you that I have, at long last, finished reading Drood by Dan Simmons. It sounds as if I am complaining, doesn't it? Not at all. I simply bemoan the lack of reading opportunities each day, coupled with my attempting to read a 900+ page novel. The novel was very good. Yet, at only 30 minutes a day, the challenge took forever.

The Novel: Having never before read historical fiction, I really had no idea what to expect; however, having gone on this adventure, I really am ready for the next one.

Drood takes us back to 19th century Victorian England to the real world of the great Charles Dickens. We become immersed in his life and the body of his literary work, as told by his friend, collaborator and rival, Wilkie Collins. I knew about many of Dickens' works, but I had no idea that he left an unfinished work, The Mystery of Edwin Drood, nor did I know of the train accident that nearly killed him at Staplehurst.

It is at this incident that we are introduced to the diabolical Drood. He is the disfigured and menacing specter that begins to haunt Dickens, get between he and his good friend Collins and ultimately drive the two apart. In the beginning, Collins swears that the character does not exist, but is merely a figment of Dickens' great imagination; however, soon Drood becomes all-too real, making Collins his slave in more ways than one, aided by the author's out of control addictions. Or does he?

I thought the novel was quite good, but very long. Many reviewers that I have seen insist that the novel could have done without half of its mass. Perhaps. It can't be easy to take real people and events and spin a fictional tale between them, especially one filled with murder, intrigue and dark-doings. If you like dark tales in a historical setting, this is your book. Mr. Simmons was masterful, I thought. He didn't show us Dickens' world, he absolutely took us there.

TBR Pile: Now that I have a taste for reading once again, I look forward to the next thing. Many of you, my fellow Indie and small publishing-house authors, have asked me to read your novels. Some have given discount codes in hopes that reviews may spring forth from them. As long as these books of yours are not 900 + pages, I'm ready. *grins; rubs hands together* There are a few on my book shelf as well as many more lining the virtual shelf of my Kindle. I love discovering that your writing is just as good, and often better, as the writing that lines the shelves of the few bookstores remaining in this world. I promise to get on this immediately...

A Word: Before I go, I would like to leave you with some food for thought, and God knows it is as much for me as it might be for you. I found it within the pages of Dan Simmons' novel and it struck me like a well-landed blow to the jaw. Many of us push ourselves extremely hard in this writing endeavor. Rather than prep you any further I invite you to read it for yourself and see how it strikes you.

"When the last autumn of Dickens's life was over, he continued to work through his final winter and into spring. This is how all of us writers give away the days and years and decades of our lives in exchange for stacks of paper with scratches and squiggles on them. And when Death calls, how many of us would trade all those pages, all that squandered lifetime-worth of painfully achieved scratches and squiggles, for just one more day, one more fully lived and experienced day? And what price would we writers pay for that one extra day spent with those we ignored while we were locked away scratching and squiggling in our arrogant years of solipsistic isolation?
"Would we trade all those pages for a single hour? Or all our books for one real minute?"

I thought Mr. Simmons' was brilliant with this. It was a book within a book.

As Wilkie Collins might ask, "How did it strike you, dear reader?"