Hello, Fire Enthusiasts. Welcome to Author Greg Sisco Day here on the blog. Some of you may wish to run away now. I’d like you to stay, but I completely understand if you don’t.
What’s that? You don’t know who Sisco is? Ah, that is a shame. In that case, please stay…
Are there any Howard Stern fans out there? I used to be, but only liked him when someone was controlling him. When the reins were removed, and he was able to be as raunchy as he wanted, that’s when I moved on. Now, please do not take me for a saint. I’m sad to report that I am very far from it. I am well acquainted with every foul word ever invented by man, pulled from the circles of Dante’s Hell or wherever bad words come from. I wished I wasn’t, and I certainly don’t practice using them. Well, you know… Suffice it to say that I have stubbed a toe or mistakenly struck my thumb with a hammer now and again. Get what I’m sayin’? The reason I tell you this is because in order to get through this next book, you’re really going to have to be able to stomach each and every one of those words – and quite frequently!
“Why would anyone want to read something so potentially foul,” you may ask? I’ll tell you why. It’s because it’s written by author Greg Sisco. And after reading nearly everything he’s written, I can tell you that he doesn’t write a bad book. Believe it.

Here’s the synopsis of his most recent: Gunslinger, P.I.
A PRESENT-DAY WESTERN DETECTIVE STORY WITH VIOLENCE, SEX, AND A TALKING CAR
His name is Garret Gallagher, but don't call him that or he'll shoot you in a particularly uncomfortable appendage. Every thug and criminal in Scud City knows him as Gunslinger. They say he traveled through time from the Old West. They say he drives a talking car. They say for five grand he can solve any murder in forty-eight hours.
As it happens, everything they say is true.
Gunslinger, P.I. follows five days in Gunslinger's life. Hired by an allegedly Irish gangster to investigate a particularly suspicious murder, Gunslinger navigates a rocky relationship with his talking car girlfriend, lusts over a foul-mouthed femme fatale, butts heads with a twenty-first century cowboy wannabe, plays Russian Roulette with an idiot, and seeks out revenge on anyone who lies to him -- which happens to be pretty much everybody.
A darkly comic murder mystery at its heart, Gunslinger, P.I. blends Western and noir with touches of fantasy, science fiction, and romance for a one-of-a-kind, mile-a-minute ride at the hands of a crass, madman antihero with no regard for the reader's comfort level. 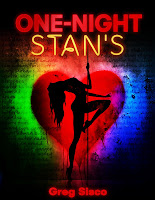 When I first began undertaking the adventure that is Gunslinger, P.I., I found myself debating whether it might be too much. His works typically are R-rated, but this one – much like One Night Stan’s is in the very least rated NC-17. I don’t know why, but I kept going. Perhaps I have a trust factor with him. In fact, I know that’s why. 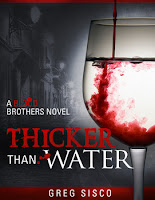 I am a devoted follower of his Blood Brothers Vampire series: I fawned over Thicker Than Water, and then raced over to grab The Wages of Sin. I am firmly on record as admitting that he blows away pretty much everything else that’s out there that’s vampire-related. That includes mine. With One Night Stan’s – a book that I arguably should not have read, due to its graphic content – I found that I just couldn’t help myself. If you haven’t yet figured it out, reading Sisco may very well be my guilty pleasure! 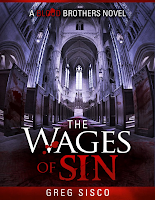 I’ve read some of Gunslinger’s reviews and can tell you that there a few upset people out there. They had no idea what they had begun to read and did not appreciate it at all. I can understand. It is definitely not for the faint of heart. However, having said that, I promise you that there are no words, sentences or turn of phrases used simply for shock value. Not one. Believe it or not, but each and every one of those are carefully and strategically placed.
“But wait!” I can hear you ask. “Don’t you go to church regularly, and pray, and everything? How could you not only read this, but seem to enjoy it immensely?” Yes, it’s true. As a Christian - especially after reading One Night Stan's - I find myself covering one eye when I see a new release from him and mutter the prayer: "Lord, what has he done now?" Lol! See, I told you he was my guilty pleasure.
Just know that if you could stomach the characters of Gunslinger, P.I. & the world they navigate, you’ll find that the book is perfect. The writing is wholly imaginative, the plot gripping and tight, and it’s loaded with the signature Sisco wit that will really pull you back for more.
Author Greg Sisco’s books
are sometimes rough stuff. Yet, every single time - no matter what the material - I find myself unable to put the book down and cheering at the end!
Posted by James Garcia Jr at 12:00 AM