Hello, Fire Enthusiasts. For those of you who may have wondered whether I was still alive, I can assure you that...I'm not really sure myself, but will let you know. *laughs, then coughs* 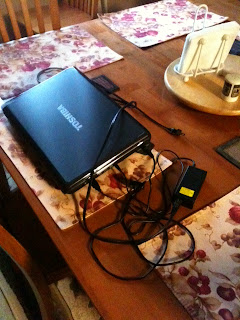 As you can see from the above picture, my computer isn't plugged in. Okay, it obviously is now because I'm typing this note Sunday morning after I took that photo; however, I can promise you that it absolutely has stood idle since Tuesday evening. I'm not sure whether that is a modern record for me or not. 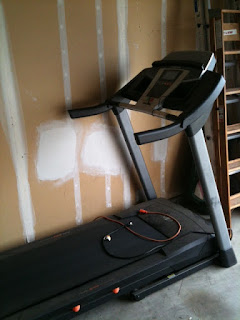 I believe Tuesday was the last time I climbed aboard my treadmill as well. As you can see it isn't plugged in either. *sigh* Thankfully, I have managed to lose much of the weight I gained during December - for those of you keeping track at home. *grins* I suppose not feeling well will help knock off another pound or two, huh? 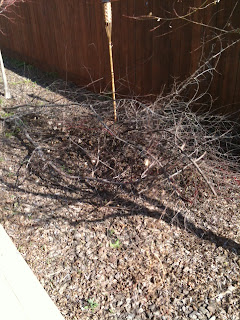 A week ago I did some pruning around my house. As you can see from the pile of branches that have yet to be cut up, I haven't gotten back to finish that job. At least the pruning work is done. This part of it can wait.

So what's happened, you ask? Although the terrible flu season which swept through the East and Midwest parts of the United States has finally arrived here on the West coast, it appears that I am simply suffering through my allergies. I called the doctor's office last Monday after work, when it had become fairly clear that my allergies had arrived, activating my post nasal drip. Unfortunately, the aforementioned flu season was overwhelming their office and causing me a delay with the needle in the hip. Tuesday morning I will have to sneak away from the day job to finally get that shot. It won't be an immediate thing, but I should slowly begin to feel better. 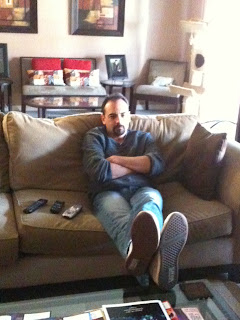 So, as you can see from the staged photo I have mostly been sitting on the couch and watching television and movies. Nothing too spectacular. I did finally watch The Best Exotic Marigold Hotel and thought it was enjoyable and worth the hype. But other than that I have simply been getting my rest and taking it easy. I haven't missed any work, although it is a miserable business when one must remain near a tissue box and a trashcan  - or a sink - at all times. Yes, as ugly as it is to describe, I wish the constant dripping I have been teasing you with in this post was a dead body hanging overhead. At least then I would feel better. I don't know about the dead guy...

Email ThisBlogThis!Share to TwitterShare to FacebookShare to Pinterest
Labels: Allergies, time off, treadmill