Hello, Fire Enthusiasts. I hope you and yours are well. I thank you so much for stopping by when you can. I realize how precious time is, especially for so many of us who are juggling family, day jobs and writing – whether we’re published authors already or merely working on it. It’s really way too much than anyone should have to juggle. But it’s art, isn’t it? And when you’ve been given a gift like that one, you don’t lock it away. Instead, you do what you can to use it. I’m speaking about all of us now.


For me, I’ve been trying to make time for the social networks, but have had little success. With my limited time I have been doing a lot of writing and reading only. With that in mind, I have a couple of my recent reads to tell you about. Both should be familiar faces for many of you as they are doing incredible work and being pretty successful at doing it. I’m talking about authors Greg Sisco and Stant Litore.


Greg Sisco and The Wages of Sin: 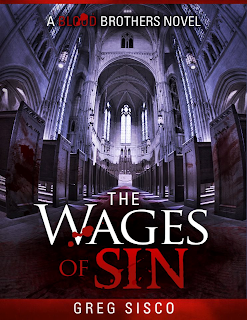 This is the second novel in Sisco's incredible Blood Brothers vampire series and I continue to be blown away by him. You may recall my having told you about book one, Thicker Than Water. Overall, this is the third of his novels that I have read, and I had this one finished by day two. It's that good.


In this second installment of the story, we find the brothers still living in Las Vegas where one miss-step after another leads them further and further into very dangerous territory. Loki begins to step out into a spotlight which makes it very uncomfortable for his brothers. At the same time, Tyr's relationship and feelings for Eva continue to drive a wedge between him and the others. Soon, new characters emerge that complicate matters further, including the brothers being pursued by not one, but two entities. And it's not altogether certain what will happen when they finally locate them.


Much like book one, book two takes us half a world and a thousand years back with some very wonderful stories that color the plot well and provide great depth to the characters. Using his gift for wit, biting sarcasm and masterful pacing, Sisco will have you turning those pages no matter what better things you think you should be doing with your time.


Previously, Sisco proclaimed that he wanted to return vampires to where they rightfully belonged, rescuing them from the "soft" genres. I can assure you that he continues to do this and does not disappoint. He hasn't erased the original mythology, giving his vampires new abilities or powers, but has simply brought them into the new century as we would fully expect them to act. There's nothing wrong with enjoying your vampires on the lighter side of the genre, if that's what you prefer; however, if you're looking for the serious stuff: the bloodletting and the horror - you can stop looking right now. Sisco's got the goods. Here's the link.


Stant Litore and What Our Eyes Have Witnessed: 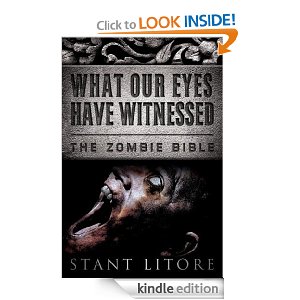 Father Polycarp has a Gift. He can bring peace and rest to the restless dead.


I just completed my second helping of Litore's incredible series "The Zombie Bible." I didn't immediately fall in love with this one as I did with Death Has Come Up into Our Windows...at least not at first. I'm just not a fan of second century Rome. But let me tell you something: whether you like Rome or not, Litore's masterful hand will drop you directly in the middle of the Eternal City and guide you about - taking you from the heights where the rich and the politicians dwell, down to the squalor at the bottom where the very poor suffer and the early Christians shield their presence from the soldiers and the hungry dead.


You might think there could be no beauty to be found in a zombie tale, but you'd be wrong. This is both an epic story of survival and a well-crafted study on the human condition, as we see the thoughts and feel the emotions of the rich and the poor, the weak and the strong, the good and the evil. We see their motivation, their heartache and their last moments as the dead desperately reach for them with their insatiable hunger.

As a writer of Christian themes myself, I cheered the ending of this piece as all of the beautiful symbolism came together, along with all of the splendid plot lines, to become a shiny red bow to decorate a truly inspired entry to "The Zombie Bible." Here's the link.


Believe me when I tell you that both of those guys are doing work that warrants further investigation. As for me, I’ve got to get back to my WIP. If you weren’t here last week, I discussed the paranormal ghost story I’ve been working on. It has a healthy splash of romance, that is pleasing me immensely, and I think it will please readers of the paranormal genre as well. I’m currently looking for beta readers for it, so if you think you might be interested, skip down to the previous post and have a look. I’d love to hear from you about it.