Hello, Fire Enthusiasts.  Once again I feel the need to apologize for taking so darn long to get anything read around here. With my impossible schedule I just don’t have the time. If you only knew how many days and weeks I have brought my trusty Kindle to work never to open it. On the upside, if I start reading your novel, rest assured that your cover will be prominently displayed on my blog for weeks! *laughs* That’s good free promotion, my friends!


In any event, I have read some real good books of late which I think you’ve probably already heard about. They seem to be doing very well for as far as I can tell, and their respective authors have been making the rounds.


For the past couple of years I have almost exclusively read Independent or brand new authors. I think there is something about discovering great up and coming or as of yet undiscovered authors that really interests me. I hope there’s a bit of that in you as well. 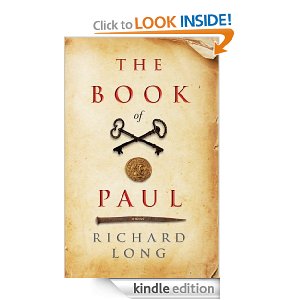 The first novel I would like to share with you is The Book of Paul by author Richard Long. Here’s the synopsis:


"Everything you've ever believed about yourself...about the description of reality you've clung to so stubbornly all your life...all of it...every bit of it...is an illusion."

In the rubble-strewn wasteland of Alphabet City, a squalid tenement conceals a treasure "beyond all imagining"-- an immaculately preserved, fifth century codex. The sole repository of ancient Hermetic lore, it contains the alchemical rituals for transforming thought into substance, transmuting matter at will...and attaining eternal life.

When Rose, a sex and pain addicted East Village tattoo artist has a torrid encounter with Martin, a battle-hardened loner, they discover they are unwitting pawns on opposing sides of a battle that has shaped the course of human history. At the center of the conflict is Paul, the villainous overlord of an underground feudal society, who guards the book's occult secrets in preparation for the fulfillment of an apocalyptic prophecy.

The action is relentless as Rose and Martin fight to escape Paul's clutches and Martin's destiny as the chosen recipient of Paul's sinister legacy. Science and magic, mythology and technology converge in a monumental battle where the stakes couldn't be higher: control of the ultimate power in the universe--the Maelstrom.


My Review: In the tradition of Clive Barker, Author Richard Long has created a world that is something like we have rarely seen. Joining science, magic and religion, and bridging this world's beginning to its terrible end, he has done something incredible. The Book of Paul is an astounding achievement with incredible characters of great depth, a body of near-perfect prose, wonderful pacing and a "voice" that will entice you through short chapters that prove to be a satisfying way of story-telling. Long takes us on a journey that is sometimes complex but at most times brilliant. He doesn't dazzle us with words, but with real dialogue and a plot unlike one we've ever seen. Prepare yourself reader, for having your mind blown is just the beginning. 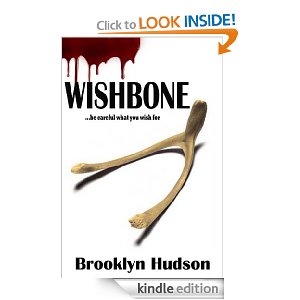 
A Manhattan power couple survive a tragedy and attempt a fresh start only to be plagued by unexplained and disastrous occurrences...be careful what you wish for.

Kings Hollow is a quaint town, nestled in the serene Catskill Mountains of upstate New York. At first, their new home appears to be the miracle they prayed for, until a traditional children's game begins to destroy their bliss; Rachael is no longer herself and Julien is experiencing a string of bad luck and unfortunate accidents.
At the center of it all is seventeen-year-old Sarah, a part-time caretaker on the property.
Can Julien and Rachael escape the nightmare of Kings Hollow...or is this just Wishful thinking?

Wishbone is a multi-layered thriller incorporating several sub-plots; in the vein of Pet Sematary, What Lies Beneath, Misery and Stir of Echoes. Dramatic horror at its best, Brooklyn Hudson takes you on a suspenseful roller coaster ride of emotional turmoil and shocking events.


My Review: This book was two parts Twilight Zone and one part Stephen King’s Misery. I found the writing to be very good with top notch narration; I wasn’t tripping all over fancy description or decorative prose, but was just consistently led by the hand and taken on a ride well worth the effort. The main character is French and I found him so refreshing as we got to see as he slipped into his native tongue on many occasions, and watched him struggle with English as his anxiety or stress level spiked. Hudson did a very nice job in using the French, as well as figuring out ingenious ways of explaining him to us so we knew what he meant or was thinking.


The plot itself was quite gripping and different. I could never really guess where we were going, which was wonderful. The work was loaded with twists and turns that kept me guessing and willing to be led along. I hear there is a Wishbone 2 in the works which also leaves me guessing since I don’t see where we could possibly go from here. I guess I will just have to take Hudson’s able hand in mine and allow her to lead on. I think you will happily volunteer to be led once you have read Wishbone as well. 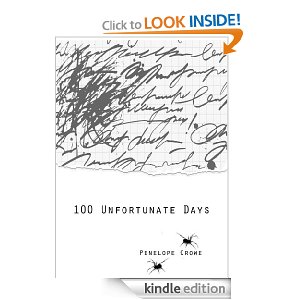 Lastly, I would like to tell you about the diary I just finished. That’s right. Diary. It is a novella that is entitled, 100 Unfortunate Days. It was written by Penelope Crowe.

"100 Unfortunate Days is a narcotic head-trip to the dark side of the narrator's mind. I've read books that gave me the creeps, read books that gave me nightmares, but until 100 Unfortunate Days, I'd never read a book that made me certain that the act of reading was inviting the attention of raw evil. Crowe delivers a blistering look into the furnace of madness, and does it with aplomb."

"Crowe has crafted a journal of 100 days that can make you laugh, sigh, and frown all in one "day". Theological, anti-spiritual, psychological, just plain weird... Crowe has a grasp of the reality and truth of this world and life that many others could never put into words - though they understand it to be true. 100 Unfortunate Days reads like the inner-workings of a dream - lyrical, powerful, and full of lessons, if you only know where to find them."


My review: Have you ever watched the film Pink Floyd’s The Wall? If not, you must at least be familiar with some of the songs. We get to see what Pink says and does, but have you ever wondered just what he was thinking? At first glance, Crowe’s work here might seem random. I assure you it’s not. Read it again. You will see a thread here and there, a method to the madness, as it were. This really is a brilliant piece, loaded with substance. Enter the mind of a madwoman. You’ll see glimpses, I think, of how she got there. I believe you’ll find traces of truth as well as slivers of insanity, and perhaps far worse. You may even find it dangerous to read this book – especially during three very particular times per day. If you have a cat, keep a steady eye upon it. It knows far more than it’s letting on.
We’ll talk soon.
Posted by James Garcia Jr at 12:00 AM