There really hasn't been much to discuss in the last year while I waited on others with regard to my writing career. Now that I no longer have anyone but myself to rely upon, I have been busy pulling myself up from my own bootstraps, as they say. My debut ebook is on Amazon now. The reviews have been great so far, and I appreciate everyone who has taken the time to post one. I am currently busy getting this second edition of my vampire debut released as a paperback. At the same time, my sequel Dance on Fire: Flash Point has been line-edited and beta-tested, and is now in the hands of a professional editor. I should be hearing back from her in the next few weeks. I am pushing for an October release for the ebook and shortly thereafter for the paperback version.

Without further ado, here - at long last - is the cover: 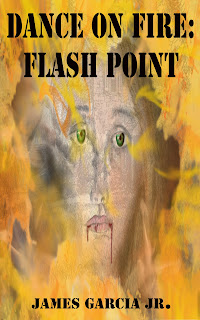 Many thanks to Author and Artist Sue Midlock for taking my words and turning it into the cover art. Well done, my friend.

Five years after the terrible events that reshaped the Swedish Village, Kingsburg lies unsuspecting as five vampires descend upon her with a great evil in their black hearts.

Five years after old wounds have finally healed and the old fires were thought extinguished, Police Chief Michael Lopez and Officer Mark Jackson and their families find themselves surrounded when fires blaze anew. The good vampire, Nathaniel, has pledged his service to these people, but he is no longer among them. He lives high in the Oregon Mountains near the California border, seeking whether God might have a place in His kingdom yet for him.

When Nathaniel discovers that Tiffany has returned, will he be too late to stop her? And will his desire to protect his friends destroy what God has begun in him?

It will all begin with a Flash Point.