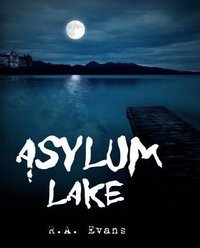 Hello, Fire Enthusiasts. I have something for you. It’s just a simple plastic bracelet. There’s nothing to fear about that, right? Here, allow me to put it on you. Thank you. That’s nice. It used to belong to me, but I’m giving it to you. Notice how you can hear my voice in your head now? Good. Now I have some things that I need you to do for me…

Oh, and you’ll do them. *laughs maniacally*

My friends, I just read a marvelous book. That’s why we read, isn’t it? It’s the potential to be amazed, surprised and very often blown away. Such a thing happened to me this past week as I (finally) opened my Kindle and began reading something that had been whispering to me for quite awhile. It is called Asylum Lake and it was written by the wonderfully demented and extremely talented R.A. Evans.

I’ll let him tell you about it first:

“The State’s second largest Psychopathic Hospital opened in 1917 on 600 wooded acres overlooking a small lake near Bedlam Falls, Michigan. Through its doors came the weak and the weary, the disabled and the discarded, the frail and the forgotten. But an open door is an invitation, and some visitors, once invited, are loath to leave. The hospital abruptly closed in 1958 under a cloud of mystery. It has remained empty and silent, save for the memories trapped both within its walls and far below the surface of the nearby lake that bears its name. At the bottom of Asylum Lake, the unremembered are growing restless.

Brady Tanner is trying to outrun memories of his own. After the sudden death of his wife, Brady retreats to the small town where he spent the summers of his youth. But he soon learns small towns can be stained by memories…and secrets, too. As Brady is drawn into unearthing these secrets, as he discovers a new love in an old friend, he is also drawn into the mystery of Asylum Lake and the evil that lies submerged beneath its sparkling surface. What is the source of this evil – and what does it want with Brady Tanner?”

The novel opens with a young man being found guilty of murder. We leave that scene and are introduced to our main character Brady Tanner. The book was nice and well-written during this time, and my first thought was that is was going to be an "okay" story. If you find that to be true as well, just hold on. It isn’t too long before we get to the chapter, entitled: "Crimes Against Humanity". From there, Evans blows the roof off, and if you’re anything like me, you won’t be able to put it back down again until you’ve consumed the entire book whole.

It was such a brilliant moment, as if the story was written by two different authors. We went from quaint story with a bit of creepiness to full-out horror. It’s tough in that house, if you happen to have a nervous stomach. I highly advice you to cover your face and read through splayed fingers. A subsequent chapter is entitled: "House of the Dead", if that's any indication.

I found the characters well written and conceived. If you read Patricia Cornwell’s Scarpetta series, you may notice a similarity between her Pete Marino and Evans’ retired sheriff Frank Griggs, but I liked him a lot, and eventually he made me forget all about Marino. The villains in this are also well-conceived, imaginative and memorable.

The pacing is done very well and is often told through flashbacks. I know this turns some folks off, but I found it easy enough to follow, thanks to time and date stamps before those chapters. Music plays a large part of what goes on and I loved that, being a huge music fan myself. The pieces selected were well chosen and not at all forced fed into the story (as some authors have done - as if the they simply wanted to use their favorite songs). I commend Evans here. He is also extremely witty and intelligent, and uses those attributes to pepper his story like a great chef would an otherwise fine dish, making it stand well above the rest.

Really, my only complaint had to do with formatting, and, if memory serves, those issues were being corrected.

This is a well written novel. It is as good and as gripping as anything that you might find on your local book shelves, and certainly deserves a spot there. What’s more: there is a sequel coming and I really am so impressed with this novel that I can’t wait for its arrival. This novel has everything: a great central plot, along with several meaty sub-plots; it is horror, paranormal and a great detective story as well. With a series, we can sometimes feel as if the story has been stretched in order to produce more books. In Asylum Lake, Evans doesn’t give us half a story, he gives us an entire story that he is telling in two parts.

Be warned. There are a few squeamish moments regarding children, but I highly recommend this fantastic novel. At first, I thought it might be good, but when that moment came - the moment when the afterburners were lit and everything just took off, I cursed happily under my breath, knowing at that moment that this ride was going to be something special. I think you will as well. 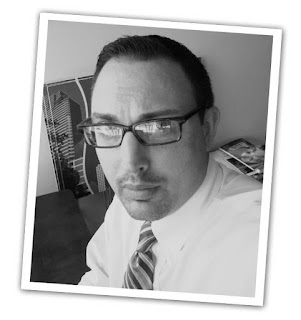 If you have yet to meet Mr. Evans, you can find him at his site here.

Get in the truck and he'll take you there. Remember: you’re still wearing that bracelet.