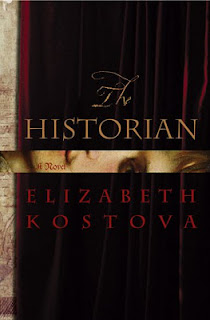 Hello, Fire Enthusiasts. How is everybody? It's a busy time, I know. On top of everything else that we always have going on, we now have the holidays fast approaching. If nothing else, I wish you all good health and safety for you and yours during this crazy-busy time.

Does everyone know author Red Tash? I had the pleasure of making her acquaintance during the Halloween Coffinhop this past October. Since then, I have grown to consider her a good buddy of mine. Now that I have completed reading the book above, I look forward to reading Tash's novel, This Brilliant Darkness. Before I get to today's review, however, I wanted to let you know that Red invited me over to her blog for a guest post. Noticing that my debut novel was a crossover, bridging both horror and Christan themes, Red encouraged me to discuss how the two concepts could mesh together. If you have the time, I encourage you to surf over and show her some love.

I just completed reading Author Elizabeth Kostova's epic novel, The Historian. I realize that I am behind the trend on this, since the novel debuted in 2005; however, if you have yet to hear about this ground-breaking novel, I would like to invite you to join us as we search for Vlad the Impaler. Not the historical long-dead Vlad, mind you, but the very much alive Vlad Dracula.

Here's the description according to Amazon.com: "To you, perceptive reader, I bequeath my history....Late one night, exploring her father's library, a young woman finds an ancient book and a cache of yellowing letters. The letters are all addressed to 'My dear and unfortunate successor,' and they plunge her into a world she never dreamed of-a labyrinth where the secrets of her father's past and her mother's mysterious fate connect to an inconceivable evil hidden in the depths of history.The letters provide links to one of the darkest powers that humanity has ever known-and to a centuries-long quest to find the source of that darkness and wipe it out. It is a quest for the truth about Vlad the Impaler, the medieval ruler whose barbarous reign formed the basis of the legend of Dracula. Generations of historians have risked their reputations, their sanity, and even their lives to learn the truth about Vlad the Impaler and Dracula. Now one young woman must decide whether to take up this quest herself-to follow her father in a hunt that nearly brought him to ruin years ago, when he was a vibrant young scholar and her mother was still alive. What does the legend of Vlad the Impaler have to do with the modern world? Is it possible that the Dracula of myth truly existed-and that he has lived on, century after century, pursuing his own unknowable ends?"

I may have done a lot of whining these past few weeks about the length of this novel, but I assure you that it was only because of my lack of time to read, and had absolutely nothing to do with this marvelous story.

The Historian takes its readers on an amazing journey for both the historical and real-life Vlad Dracula in the most charming and imaginative way: the letters and actions of three generations of Dracula hunters. These hunters are not armed with advanced weapons, nor are they muscle-bound or skilled in any way for this job. Instead, they are armed with little more than their wits, carefully evaluating and analyzing the clues of history, surrounded by dangers of every sort and passionate about ending Dracula's reign of terror.

Some might suggest that the novel is too long, but anything less would have been the cheater's way out, spoon-feeding the reader the necessary clues, and racing us through not only history, but country after amazing country.

What we have here is a wondrous adventure that is thrilling, suspenseful and, at times, very dark. Although she writes frequent moments of great horror, Kostova navigates these waters with a masterful touch that leaves us not with a simple horror tale, but a historical novel that delivers all of the goods; including humor, romance and heartbreak - perhaps in a way not seen before. Often, she would take her "camera" off of the impending violence or intimate moment. In the hands of a lesser artist, it might have come across as a poor job. I remember moving on to the next chapter in those instances, thinking to myself that what I had just read was done perfectly. I recall one moment very clearly. A character held a dagger directly over the heart of a new vampire that had once been his friend. He did the deed, but we never saw it happen. It wasn't because Kostova left the scene too soon. Instead, she held the moment for us as if it were a fine wine meant to be savored, while she described so much history that came together in one instant, leaving us more than satisfied.

Whether you believe the title of the book refers to the task Dracula sets up for some of his victims; the three generations of flawed but beautifully created characters that cast aside everything in their pursuit of the fabled monster; or Kostova herself who does a superb job of juggling adventure, intrigue and centuries of human history - The Historian does not disappoint.

Just remember to take your time. It's meant to be savored.