Hello Fire Enthusiasts, today is May 9th. Does anyone know the significance of the date? Yes, I know it's Mothers' Day; we'll get back to that. If you've read anything about my novel, "Dance on Fire", then you may recall that this is the time of year where the city of Kingsburg, California celebrates its heritage with the annual Swedish Festival.

Next weekend marks the 45th year, and as always, there will be a parade on Saturday, a pea soup and pancake dinner downtown on Thursday, a smorgasbord dinner on Friday, etc., etc., etc. There's really a lot to see and do for all ages.

A couple of years ago we almost had to cancel the whole thing after those two police officers were found brutally murdered. Okay, calm down. Fact just bumped headlong into fiction there. Of course, I'm talking about the novel again.

In the novel, about ten days before the start of the festival, two of Kingsburg's finest were killed. Their blood and been completely drained. Soon, another body is discovered. Eventually the body count got so high that the festival was nearly lost. Our mayor, in her first year of office, panicking that her career might be over before it began, was coming down pretty hard on the Chief of Police as if that might help him catch the killer any quicker. Police Detectives Michael Lopez and Mark Jackson were doing their best but it wasn't easy considering that there were more than one vampire loose in their fair city.

If that hasn't yet convinced you to check out the book, then consider the following: there is blood and lack thereof; Christian themes (one of the vampires is a good guy and may not be out of God's kingdom after all); a bit of romance (the good Vampire meets Mrs. Michael Lopez and the both of them are smitten); and the story takes place in a real town just before a real event which is next weekend. 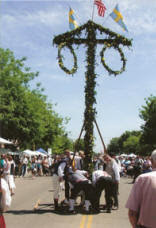 Perhaps we'll see you there.

Now, it is also Mother's Day today. Happy Mother's Day to all of you with children or who care for other's children. Thank you for all of your tireless efforts. It should actually be Mother's week, should it not? In any event, I hope that you get some time for yourself today, or if being surrounded by your children is what the doctor ordered, then I hope you will be and you enjoy it. Luckily for me, my own mother is close enough so that I can visit her, as well as my Grandmother.