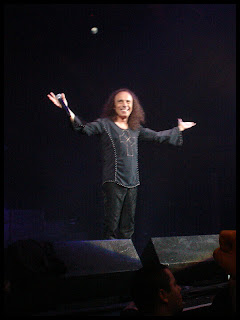 For those who have been following for a while, you will remember me mentioning how important music is and has been in my life...

In 1983, I was 14 years old and was just beginning to enter what I would refer to as my formative years. It was then that I would begin to discover reading when I came to realize that I was drawn to horror novels. At the same time, though I was born into a house that listened to Johnny Mathis, Gene Pitney, The Righteous Brothers, The Supremes, etc., I took a wood shop class in junior high school where the long-haired dregs of humanity, as I lovingly refer to them, began to influence me with their hard rock music.

Though I knew who Kiss was because of their notoriety, I knew nothing about the discovery that I was about to make. One might say that it was peer pressure that ultimately drove me, the fact of the matter was that I took to this new music: hook, line and sinker.

Soon, I was growing my hair long, too, and listening to Ozzy, Iron Maiden, Scorpions, Judas Priest, Sammy Hagar, Quiet Riot, Def Leppard, Van Halen, AC/DC and Black Sabbath, to name a few. I had yet to hear anything about Led Zeppelin (that would not come until Phil Collins introduced me to his three friends in Philadelphia at LiveAid in '85). Eventually, I would go backwards and discover The Doors, Jimi and The Rolling Stones. Later, new bands would come: Night Ranger, Motley Crue, Ratt, Poison, Great White and all the rest of the hair bands.

One of those that I listened to during these teenage years was Ronnie James Dio. It has been nearly a week now since he has died, and I have spent quite a bit of time, reminiscing about all of those lonely, unbothered times spent lying on my bed and escaping to all of that music. Although not yet a Christian, anything remotely considered Satanic by others had no effect on me. Whether it was or wasn't, I did not pay it any attention. I think most of us now realize that anything pushing boundaries was simply attention getters. I remember a news magazine on television one night where the topic was heavy metal music and its affect on young minds. My mother turned to me and warned me never to bring any of it into her house. The funny thing was: I had already done that; I owned nearly every album that was shown!

No, it was only the music. I was drawn to the fantasy world of the songs. And being a skinny, long-haired rock n roller, and having no girlfriends, I identified with all of the loved and lost lyrics. I would say that it was both the music and the horror novels that equally worked to form the writer that I would become.

As I said, I have spent a lot of time this week thinking back to those teenage days in my room, flanked by posters of the metal gods on every conceivable wall. I found the man that I would become there; I experienced loves and its loss there, well before I had ever been kissed; and I learned to dream there.

We have lost others during my lifetime, but most of those were from misadventure. This was natural causes. My heartfelt sympathies to Wendy and the entire Dio family.

Thankfully, though his tongue has been stilled, we still have his music. In the song, "Stars", for the Hear 'N Aid charity project, Ronnie wrote: "We are magic in the night. We are shadow, we are light. We are forever, you and I..."

We'll miss you, Elf, and pray to meet you again in some far away day.