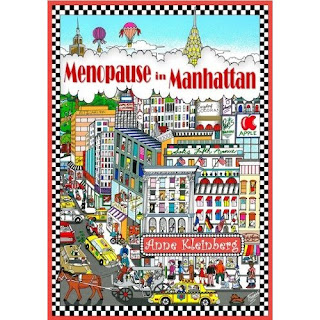 Hello, Fire Enthusiasts. I hope you had a fantastic Easter, a great long weekend or both. I know I did.

As promised I would very much like to tell you about this fantastic book that I finished a little over a week ago. As you can see the novel is entitled, Menopause in Manhattan. I'm afraid that there are no vampires in this one, nor are there werewolves, ghouls or serial killers of any kind. Instead, there are simply men and "women of a certain age".

Why, you may wonder, did I read such a book? Well, frankly, it's because of many of you. You see, being a writer myself, I know how hard this business can be. I know the odds of writing that "Great American Novel", if my friends from other countries will excuse the expression. So, I try and keep an open mind when it comes to my friends and their books. If nothing else, I know that buying a copy of your novels helps you...and I like doing that.

Unfortunately, it isn't often that I manage to find the time to read.

Thankfully, I found the time to read this one. If you have yet to meet Author Anne Kleinberg, please allow me to introduce you to her.

According to her website which you can find here, Anne Kleinberg came to the writing of Menopause in Manhattan through an altogether different route. A friend and editor suggested that she write a murder mystery, with a cook at the center. Although Anne was reluctant at first, an idea was hatched.

The attempts to fulfill that original request soon became a story about a 50-year-old woman who goes through some major changes in her life.

Anne grew up in Laurelton, Queens New York. Her junior year was spent overseas at Tel Aviv University which sparked her love of Israel.

A few years later, she went back to school (Fashion Institute of Technology) in Manhattan where she earned a degree in interior design.

Anne pursued that design career in New York City; however, she suddenly decided to start over in Israel. "Call it epiphany (or) call it lobotomy," she says, but she packed up her shih tzu and her drafting table and off she went.

A restaurant review that she wrote for the Jerusalem post led to a career as a lifestyle journalist, where she wrote about food and people. That led to editing and translating books which then led to writing cookbooks. She’s written four to date, and Menopause in Manhattan is her first novel.

The following is the blurb about the book:

"Welcome to New York City, and the world of publishing, interior design, fashion and food. As Elie Sands turns 50, she seems to have a charmed life. Executive editor of a top design magazine, she’s married to Philip, a furniture tycoon, and she’s the mother of two accomplished young women: Lexi, the “good” daughter, who’s newly married and living in Jerusalem and Chloe, the “wild” one who’s a marketing maven in her father’s company. Elie is an avid cook, lives on Central Park West and owns a house in the Hamptons. Syd Sorenstein is Elie’s mentor and upstairs neighbor. A chic, opinionated financial adviser, widowhood has not extinguished her lust for living. She’s a workout fanatic and world traveler who does exactly as she sees fit, with little interest in what others think. Elie’s other dear friend is Michael Delmonico, partner of Daniel. He’s entertaining and flamboyant, self-centered and hopelessly disorganized, but has an eager list of clients waiting for his interior design services. Syd and Michael despise each other, but they both adore Elie. Life is good. Or is it? Elie makes a distressing discovery, Syd’s reputation is threatened and Michael gets shocking news from his past. Instead of easing comfortably into middle-age, each is forced to deal with unforeseen challenges, unresolved issues and reassessing what lies ahead."

I met Anne on the blogosphere last year and followed her progress as she worked on editing and then the formatting for this novel. Upon its release, I found myself purchasing a copy due to several factors. The first was wanting to support a buddy. The second was my desire to read something new. Lastly, with lingering memories from having just visited New York City this past March, I was intrigued by a return to that wonderful city - even if only within the virtual pages of her book.

Perhaps because it was from an author I know or because I'm just a big softy, I don't know, but I thoroughly enjoyed this book. With life-like characters that I loved being surrounded by and some of the most realistic dialogue I have ever read, I just couldn't get enough of this novel.

Kleinberg wove her wealth of experience and learned skills into a story that I found to be rich in detail. Consistently, we get the best and worst of interior design, food and fashion; as well as the feel of both New York City and Israel, which all work together to enrich the plot and transport us right into the heart of this tale.

When I informed Anne on Facebook about how well I enjoyed her novel, she told me that she worried that there might be too many Jewish references, but I thought it was handled very well. Did I understand every little thing: no. However, I wanted to read something fresh and new and I got just that. The Jewish culture presented in the novel was just one more beautiful strand of detail.

It is difficult to pin down just which genre this novel fits with. It gives you the tender warmth and emotion of Nicholas Sparks, but also a flavor of things that perhaps only Kleinberg herself could deliver with such a diverse background.

If you find yourself in a place where you'd like something new to read, you'll find this gem over at Amazon.com in the Kindle store for only .99 cents. I was intrigued from the first chapter, loved the way she handled flashbacks, laughed aloud several times and felt as if I had gone on a grand adventure. It may be if you're anything like me, you'll feel as if you are stealing and want to give this great writer more money. Hopefully she's hard at work on the next one!